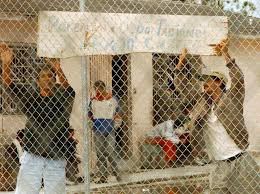 Human rights watchdog Amnesty International says it got “no answer” when it called on Bahamian authorities to allow independent monitoring of the Carmichael Road Detention Centre.

The organisation says it has been keeping an eye on the situation of Cuban migrants being detained in the Bahamas and then deported to Havana.

“So far we haven’t been able to assert or not the allegations of ill-treatment against the Cuban migrants.

The organsation said detention conditions in the Bahamas, and specifically at Carmichael Road, “are a longstanding concern” for Amnesty International.

In 2003 Amnesty published a report following an investigation it did about conditions in the Bahamas which listed its concerns, including detention conditions “which fail to respect the Bahamas’ international human rights obligations.”

“Since then Amnesty continued to receive periodic reports of ill-treatment at the Carmichael Road Detention Centre, and our organisation continuously reported these claims and called on the Bahamian authorities for an independent investigation,” said Amnesty.

Amnesty said it was “concerned” the findings of investigations announced by previous Bahamian governments into ill-treatment at Carmichael Road have never been made public.

“Following concerns raised in 2004 by the UN Special Rapporteur on torture and other cruel, inhuman or degrading treatment or punishment on alleged beatings of detainees, the then government failed to provide information on the investigation that had apparently been opened.

“Similarly, the findings of a 2009 investigation by the previous government into conditions at the facility have never been made public,” the organisation said.