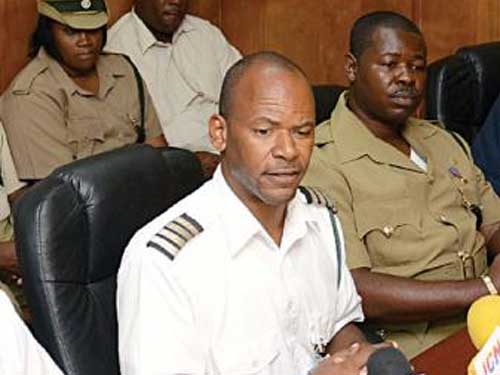 Last night, Minister of State for Finance Michael Halkitis told The Nassau Guardian the government intends to meet with the union this week to discuss its concerns.

Smith said the government made the changes on July 1 without consultation with law enforcement.

He said while the changes have some benefits, the officers are upset over the increase in out of pocket costs they must pay if they decide to get medical care outside the plan’s approved network.

“. . .There is overwhelming support to pursue every legal entitlement,” Smith said at a press conference at the Police Staff Association office on Bank Lane.

He was flanked by representatives of the Prison Officers Association and the Police Staff Association, who are also upset over the changes to their health insurance plan.

“All we want is a strike certificate.”.

Smith said his union met with Christie last week. However, he said the group does not need another sitdown with him.

He said Christie has the power to make the change without any input or discussions with the aggrieved officers.

“We could conceivably get together and get a lawsuit to sue the government, but we chose the avenues available to us in the law and we went to file a trade dispute.

“We wrote him first, a month passed, simply to get his office and the office of the minister of immigration to change it.”

Smith said that a prison officer sought medical attention last Thursday and the new out of pocket fees were “prohibitive”.

He said that officer later died. “That is a serious position that we now find ourselves in,” he said.

“Very few persons can afford those high out of pocket expenses. The average Customs, Immigration, Defence, police person cannot come up with those fees just to get basic medical coverage.

“Really it cuts to the core of human dignity, you know, when a man working hard for the government, for his country is unable to go to the medical practitioner of his choice. . .because the cost is so prohibitive.

“Is it that we only want certain elements in the society to access certain institutions?”

Smith said the officers were not making a callous decision by considering a strike vote and added that the government only seemed to pay attention after unions take action.