Most Schools Below Average 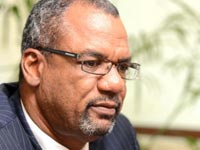 Only six schools out of approximately 100 averaged a grade of C+ or above in the Bahamas General Certificate of Secondary Education (BGCSE) exams, Minister of Education, Science and Technology Jerome Fitzgerald revealed.

This includes both public and private schools which sat more than 20 papers.

Fitzgerald explained that each exam counts as one paper.

Only three schools in the nation attained a school grade average of B-.

Another three schools attained a school grade average of C+.

Fitzgerald did not name the six schools or whether they are public or private schools.

The Ministry of Education released results for the 2013 BGCSE exams last Thursday. BGCSE English scores remained at a D letter grade, while math scores fell from E+ to E.

The minister said students who do well in school do so for the most part because of their parents’ vested interest in their education.

He said he is more concerned about some parents’ lack of involvement in their children’s education than recruitment, training, improving leadership skills, capital and human resources investments.