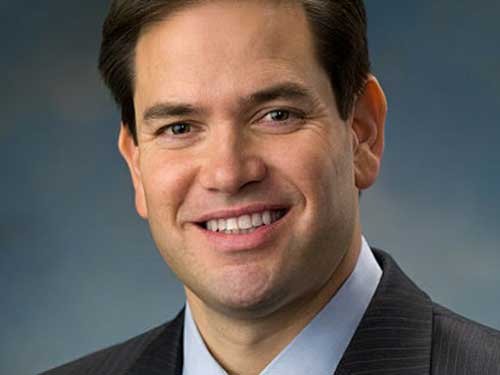 United States Congressional members have expressed their ‘outrage’ in a letter to Perry Christie over Cubans being sent back to Havana.

The letter comes from Senator Marco Rubio, who has been touted as a potential Republican runner in the 2016 US presidential race, along with Bill Nelson, Ileana Ros-Lehtinen, Mario Diaz-Balart and Albio Sires.

The letter says: ‘We write with grave concern over the treatment of Cuban refugees detained in The Bahamas. Specifically, we are outraged that Cuban refugees, according to various media reports, were beaten by prison guards and denied adequate food, water and medical care.

“The description of their treatment is deplorable, but we recognize your government’s efforts in accepting responsibility and for committing to a full investigation into what occurred.

“It is our understanding that the Government of Panama offered asylum to the Cuban refugees on humanitarian grounds. Given the fact that the Cuban regime maintains one of the world’s worst records on human rights, we are disappointed by your decision to repatriate the freedom-seeking Cuban refugees back to their brutal oppressors. We urge you to halt any further repatriation of Cuban freedom-seekers in the future.”

It came after Foreign Minister Fred Mitchell said on Friday that 24 Cuban nationals had been deported from The Bahamas to Havana.

Ros-Lehtinen said: “It is unconscionable that the Bahamian authorities have decided to forcibly repatriate Cuban freedom-seekers back to their brutal oppressors under the Castro regime. Despite the fact that Panama had offered to grant asylum to 19 Cuban nationals that were being detained in The Bahamas, the government of The Bahamas took the misguided approach to cave to the influence and pressure of the Castro brothers and sent these refugees back to the place they so desperately tried to escape.

“It’s obvious the Castro regime is using these refugees to seek revenge against the Panamanian authorities for seizing the North Korean bound ship, from Cuba, carrying illegal arms last month. Not only did these refugees face brutality by the Bahamian prison guards and live under unbearable conditions due to the lack of basic necessities, they will now be forced to face definite retribution and deplorable conditions in Castro’s gulags. Cuba maintains one of the world’s worst human rights records, and this spineless decision to send them back is not only unacceptable, it is immoral.”