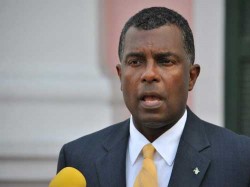 The government has yet to appoint the retired Court of Appeal justice and the other person who will lead the final investigation into the alleged abuse of Cuban detainees at the Carmichael Road Detention Centre, The Nassau Guardian confirmed.

The reported abuse allegedly happened nearly four months ago and there is widespread interest in a report being completed and publicized.

Shadow Minister for Foreign Affairs Hubert Chipman said yesterday it appears the government is dragging its feet in the matter.

“We need to be talking about how we are going to correct what happened at the detention center, not still asking where the report is,” Chipman said.

Minister of Foreign Affairs Fred Mitchell has directed all inquiries concerning the probe to the Ministry of National Security.

One government official, who was not authorized to speak, said yesterday that the government was still in the process of confirming the retired Court of Appeal Justice to head the investigation.

Mitchell told reporters last month that a cleric, who the government had also engaged, was unable to take part in the probe as initially planned.

Miami-based protest group Democracy Movement also hit out at the government over the delay yesterday.

Ramon Sanchez, a spokesman for Democracy Movement, said: “If we knew that they were releasing the report it wouldn’t be so bad.”

On August 15, Mitchell told reporters that he hoped to have the completed report in little more than a month.

“We are in the process of settling the terms of reference of the review of the investigation, which we expect within a week,” he said at the time.

“We are hoping within 30 days of the review being settled, which should be sometime this week, we should have a report.”

On Monday, Minister of National Security Dr. Bernard Nottage told reporters that he has not made an announcement on the allegations or the report because he had yet to receive all of the “bits and pieces” he needs about the issue.

Prime Minister Perry Christie said last month that he has no problem releasing the report.

He said the only thing that would make him hesitate in doing so is if its release would violate people’s rights.

Chipman said he found it strange that the government’s team of investigators will not have the alleged victims available to them.

“When you conduct this investigation, who are you going to interview to get the Cuban side?” he asked.

“There is nothing else you can ask these people because they aren’t here. They were repatriated. The people who were allegedly beaten are not here.

“Where are you going to get your information from, the defence force and immigration officers?”

A disciplinary hearing into the alleged abuse was also postponed, and there is no indication when it will take place, according to attorney Wayne Munroe, who represents one of the defence force marines accused of the beatings.

Sanchez said yesterday that the government is creating too much uncertainty over the issue.

“Our concern is if we don’t pursue this issue, it will go to sleep,” he said.

“That means that these people will still hang around and abuse other people.”

The group has staged multiple protests against The Bahamas in the wake of the allegations.

According to one of the marines interviewed as part of the initial investigation by the defence force, Cuban detainees were severely beaten at the detention center for almost two hours after they attempted to escape on May 20, and one even appeared to have temporarily lost consciousness as a result of the abuse.

Nottage is expected to hold a press conference at the Ministry of National Security this morning to discuss the recommendations made at a recent public meeting on crime, “among other pertinent issues”.

It is unclear if he will give an update on the government’s investigations into the alleged abuse.