Bimini Opens Up To The World 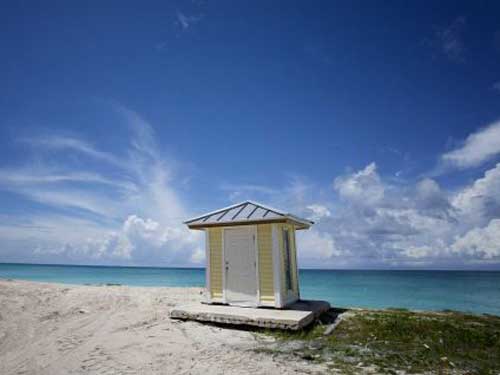 Every time a cruise ship docks in Bimini, the population of this tiny archipelago just 50 miles off the coast of Miami could nearly double.

The Bahamas National Trust, a non-governmental environmental organization created by Parliament, as well as researchers at the Bimini Biological Field Station, where scientists come from around the world to research a thriving shark population, say runoff from a proposed golf course would destroy a protected area of mangrove that acts as a nursery to the fish, conch and lobster that make the place a destination.

A secondary issue is the 1,000-foot jetty that Genting will build to shorten the time it takes to get off and on its ship, which began service in July. Opponents say the project will damage coral reefs; a company official says it complies with environmental regulations and that the site was chosen specifically to minimize any threat.

Genting, which has been seeking to build a casino in downtown Miami amid opposition, insists the golf course is still under consideration and would only be built if it can be done in an environmentally sensitive way.

Bimini only has a full-time population of about 1,600— about the size of a full-capacity cruise ship — and has avoided mass tourism because of scarce air service and the passing Gulf Stream, which makes the crossing from South Florida too rough for small vessels much of the year.

For Eric Carey, executive director of the Bahamas National Trust, the Resorts World project is excessive for a place so small you can traverse the main island of North Bimini in a few minutes in a golf cart, rarely losing sight of the ocean in both directions.

“Everyone understands that all of our islands rely on tourism,” Carey said. “But when one thinks about going beyond what’s there now, with a golf course and the jetty, well that borders on being out of scale.”

Thousands have come since the cruise ship service began operating, but Joseph Roberts, a commercial fisherman and proprietor of Joe’s Conch Shack, hasn’t seen enough new customers to allay concerns that development will contaminate the mangroves that partially encircle Bimini.

“I’ve got three grandsons and I hope that one day one or two of them could be fishermen … and make a decent living,” Roberts said as he pulled a giant sea snail from its shell and chopped it for salad. “What are they going to have if you destroy everything?”

This is a place with a colorful history. In the colonial era, it was a hideout for pirates who stalked treasure-laden Spanish ships coming from South and Central America and the Caribbean. During Prohibition, liquor was legal in what was then the British Bahamas, and Bimini was a source of booze for South Florida.
Bimini has also seen its share of glamor. Hemingway visited in 1935 and then returned for the summers of 1936 and 1937, writing part of “To Have and Have Not” while there, according to the text of an exhibit in a small museum in Alice Town. Other famous visitors included Martin Luther King Jr., Sammy Davis Jr., Judy Garland and Lucille Ball, who stayed at the famed Bimini Big Game Club.

Bimini won fame again when the public learned that Gary Hart, a leading Democratic presidential candidate in the 1988 U.S. election, had taken his mistress, Donna Rice, to Bimini, where they were captured in a now-infamous photo, prompting him to drop out of the race.

Cruise ships have stopped offshore in the past and ferry service has been tried from Florida. But Resorts World Bimini Bay is unprecedented, and some Biminites and visitors question whether the venture can compete with other attractions, including Baha Mar, a $3.4 billion hotel-and-casino project under construction in Nassau, the Bahamian capital.

Genting projects the number of visitors to Bimini will grow from 70,000 last year to 400,000 in 2014, which is likely to produce ripple effects throughout the local economy, a fact welcomed by Biminites like Robert Saunders, who works at a local hotel.

“There are people who don’t want any progress anywhere,” Saunders said. “There can be downsides and upsides, but I see more upsides.”

Originally Published by The Associated Press