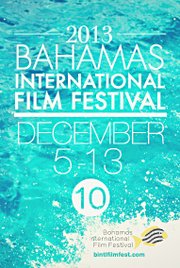 This year’s poster for the Bahamas International Film Festival has been unveiled.  It was designed by Theo McClain of IDYA Studio in Nassau.

The tenth annual festival runs from December 5 to 13, 2013.  Films are due to be announced at the end of October.

“The concept of this year’s Bahamas International Film Festival (BIFF) poster is a formal inquiry into the ephemeral visual engagement that surrounds us,” said Mr McClain.

“BIFF has truly been a life changing experience and has also inspired me to explore the medium of film. I’m honoured to design yet another poster for BIFF,” he added.