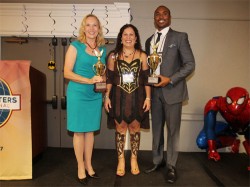 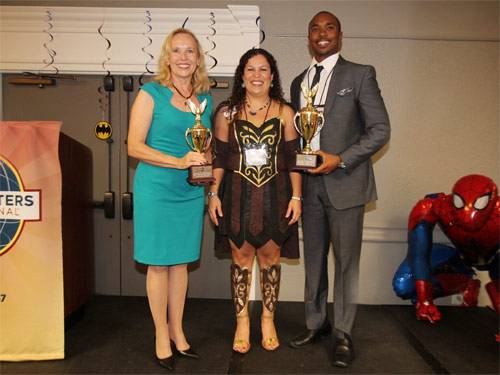 “It was certainly a rewarding experience,” said Mr. Palacious, the Vice President of Membership for Club 1600, the first branch of Toastmasters to be established in The Bahamas back in 1969.

“Having advanced to represent our Club and Area for the past two years in this competition meant that I had some experience to prepare me for this international stage. Each time I was eliminated in prior contests it challenged me to improve myself both as a communicator and an individual, which is the core of this self development program.”

Mr Palacious added: “With three years in the program, I owe so much of my success to the members of Club 1600 who have been a consistent source of guidance, encouragement and wisdom.”

Club 1600 President, Franklyn Winder was “deeply pleased” that a club member was able to not only represent The Bahamas and Division I, at the District level, but also capture this top award.

“As the grandfather club of Toastmasters in The Bahamas, Club 1600 will continue to lead the way,” said Mr. Winder.

Founded in 1924, in Santa Ana, California, Toastmasters International is a worldwide leader in communication and leadership development.

Its global membership is more than 292,000 strong. Members improve their speaking and leadership skills by attending one of over 14,000 clubs in 122 countries.

In order to compete at the District’s Fall Conference on November 8, Mr. Palacious had to compete and win at the Club, Area and Division Contest levels.

The core unit of Toastmasters is the club, typically comprised of 20 to 30 members. A group of four to six clubs form an area; while four to six areas form a division.

Over 300 Toastmasters from South-East Florida and The Bahamas attended this year’s Fall Conference.

In Florida, Mr Palacious, who represented Division I, competed against six other contestants including five from South Florida and a fellow Bahamian.

“The purpose of the Speech Evaluation Contest is to encourage the development of evaluation skills in our members in order to recognize speakers who are at the top of their game,” explained Lt. Governor with responsibilities for Education & Training for District 47, Distinguished Toastmaster (DTM) Anthony Longley. DTM is the highest distinction awarded to members. It’s earned by only three percent of Toastmasters worldwide.

At the beginning of the contest, a five to seven minute test speech was presented by a pre-assigned speaker.

At the conclusion of the test speech, contestants were escorted out of the room to a sound-proof holding area. In just five minutes they had to prepare an evaluation of the speech. When the time was up, their notes were taken away.

Numbers were drawn to determine the order in which contestants presented their evaluation speech. Contestants were not permitted to hear competitors who went before them.

Contestants were judged by an anonymous panel who assessed their mastery of evaluating the test speaker’s performance based on analytical quality, recommendations, techniques and summation.

When the scores were tallied, Mr Palacious was declared the winner.