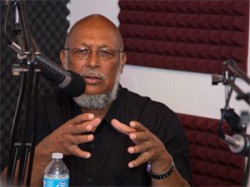 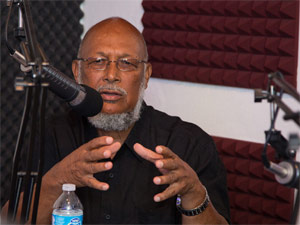 Biminites who have been quietly talking among themselves as heavy equipment stands at the ready to alter their lifestyle and their environment are “petrified with fear” about ongoing expansion efforts by Resorts World Bimini, but too scared of victimization to speak out publicly, says Bimini Waterkeeper Joseph Darville.

Speaking on a popular radio show being broadcast live from Bimini recently, Darville — who also serves as a director of the fast-growing environmental movement Save the Bays — said the majority of Biminites are resisting the development the central government thinks is good for them, but as scared as they are of the changes to lifestyle and environment, they are even more afraid to voice their opinion.

“What is happening on and around that little gem in the ocean, Bimini, will go down in the history of the Bahamas as the greatest potential tragedy to an eco system,” said Darville.

The tiny island, with a population of less than 2,000, has been grappling with considerable changes as construction ramps up by Genting Group, a giant conglomerate originating from Malaysia. The resort developer is targeting up to 1,500 tourists daily from nearby Florida following the construction of a cruise ship terminal.

“There were hundreds of people who signed a petition against that particular development, but people are afraid to come out and face them publicly because they fear possible political and economic repercussions,” said the retired educator, environmental and human rights advocate. “They are afraid. They are petrified with fear.”

Droves of Biminites have signed a petition against development or voiced concerns in private corners. But activists claim most residents are fearful of taking protests to the next level.

Darville noted that many Biminites have been kept ignorant of the developer’s plans, and once information becomes available, “fear and anxiety” tends to take over.

Last week, a long-awaited Environmental Impact Assessment (EIA) on the project spoke for them. According to the report, two-thirds of Biminites did not want an increase in the island’s tourism arrivals. It also identified a number of disturbing environmental concerns should development by Genting Group continue and concluded that the scale of the resort that would eventually aim to bring in 500,000 visitors a year to the island that now attracts about 50,000 would have cultural, environmental and infrastructural impact.

Despite the report, many Bahamians remain in the shadows.

Fred Smith, environmentalist and senior partner at Callenders & Co, said most locals are more concerned about protecting their livelihoods.

Highlighting the “political culture of intimidation and victimization” in the Bahamas, Smith felt both political parties have allowed this environment to fester. Resorts World Bimini has rapidly become the largest employer on the island, making its overall economic influence more profound.

According to one local resident who wished to remain anonymous, development on Bimini has been destructive and haphazard for years.

“I walk my dogs on the beach every morning, and I can always tell when they are dredging in Bimini Bay,” said the resident who has lived on the island for more than two decades. “There is a ribbon of dead pink shrimp from one end straight up to the northern end.”

Describing herself as “patriotic”, a Bahamian businesswoman also conceded that she must be “careful”. Success on the island depends on positive relationships with those holding the strings of influence, she said, and while most Biminites talk about these issues privately, they tread carefully to avoid victimization.

“You have to watch your back,” she added. Others who gathered around the radio show production, /Issues of the Day/, live from the Bimini Big Game Club, nodded in agreement, but covered their faces to avoid being seen when the radio show airs on Channel 14, JCN. Half a dozen said off-air that they had been negatively impacted, losing taxi fares, fishing charters and other business since the Bimini Superfast ferry began service this summer, transporting guests directly from Miami to the Resort World Bimini casino door and zipping back to Florida in a matter of hours. Only one was willing to speak on radio. Government argues that more jobs are forthcoming and construction of two hotels will boost all business.

Darville claimed that the situation on Bimini and elsewhere illustrates how Bahamians are “as enslaved or more enslaved now than we were in the beginning”.

The human rights watchdog said that political leaders have fine tuned “psychological enslavement”, keeping Bahamians in the dark on various issues and far removed from the decision-making process, even in matters that affect them directly.  Meanwhile, he said, most citizens remain  unaware of their rights.

“We are no longer plantation people who are satisfied with not knowing anything with respect to what happens to them,” he added. “We are a democratic society and therefore we expect more.”

Caption: Bimini Waterkeeper Joseph Darville expresses concern that a massive development plan that calls for delivering 500,000 visitors a year to the island that now attracts about 50,000 poses an historic threat to its waters, infrastructure and way of life. “Bimini will go down in the history of the Bahamas as the greatest potential tragedy to an eco- system,” said the retired educator, a director of Save the Bays and environmental advocate. Nearly 5,000 people have signed a petition calling for an Environmental Protection Act for The Bahamas.