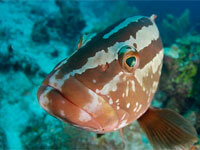 The Bahamas Reef Environment Educational Foundation (BREEF) is pleased that the government has finally announced the three-month December 1 – February 28 closed season for the Nassau Grouper this winter, but further notes that it is time for the closed season on this highly-prized but endangered species to be fixed in our legislation, rather than having to wait on a Ministerial decree each year.

“It is just a few days before the start of the closed season and Bahamians are just being notified of this important closure. Many people think that the closed season on Nassau Grouper is legislated in The Bahamas.  It is not.  The decision to announce a closed season or not, rests with the Minister of Agriculture, Marine Resources & Local Government.   This delay highlights the critical need to have fixed dates for the closed season, as is the case for other valuable species such as the crawfish and the stone crab so that fishermen, the public and law enforcement agencies can be prepared.  This is not just about a fish, people’s livelihoods will be significantly impacted if this fishery collapses.” says BREEF’s Executive Director, Casuarina McKinney-Lambert.

The iconic Nassau Grouper is listed as “Endangered” on the IUCN’s Red List, as its populations have declined by about 60% over the past three decades.   In areas such as Florida and Bermuda, the Nassau Grouper Fishery no longer exists, largely because people have been allowed to fish on and fish out entire spawning aggregations during their breeding period from November -March. This collapse does not have be a part of the future for the Bahamian Nassau grouper fishery, but serious action needs to take place now to avoid it.

The Bahamas has some of the last remaining populations of Nassau Grouper.  We only need to look to neighbouring countries to see what will happen if we continue to delay having an annual fixed closed season for this valuable fish that helps to sustain the livelihood of our fishermen, attracts eco-tourists to our country and is an important part of Bahamian food culture.

Nassau Grouper has already started to disappear from many restaurant menus that used to read ‘grouper fingers’ but now read ‘fish fingers’ for example.  The scientific evidence, both regionally and locally, clearly sounds the need for us to take further action to protect this species. Many historically abundant spawning aggregation sites have already been lost. An example is the well-known Bimini aggregation site that was recorded having 30,000-100,000 fish in 1970, and is now completely gone, documented scientists from BREEF, Scripts Institute of Oceanography and SCRFA earlier this year.

“For twenty years now, BREEF has advocated to ensure a sustainable Nassau Grouper fishery. We remain hopeful that the government will take this next step in the best interest of Bahamians and do what is necessary to protect Nassau Grouper for the benefit of present and future generations.”

In the meantime, all residents and visitors can help by not catching, selling or purchasing Nassau Grouper from December 1 – February 28. Please support our local fishermen, seafood vendors and restaurants by purchasing other fish during this period.