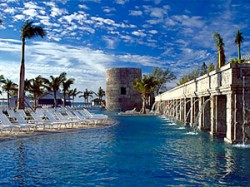 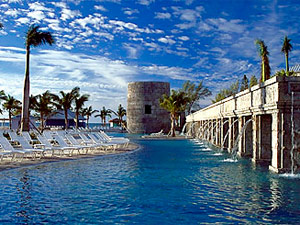 Sunwing’s first flight arrived in Grand Bahama on Thursday afternoon with 150 passengers from Edmonton, Canada, as scheduled. However, the new Memories Resort, which was also expected to open, was not quite ready to receive them.

David Johnson, director general at the Ministry of Tourism, was at the airport around 3:30pm to witness the anticipated arrival of the 727-800 aircraft.

“Today marks the culmination of many months of negotiations and planning. And today we are welcoming the first non-stop five-hour flight from Edmonton into the Grand Bahama,” he said.

“We are very happy to see this flight and to see some 150 passengers disembark and staying one week in Grand Bahama, giving us a significant contribution to the local economy.”

Mr Johnson said the resort is not open, but efforts are underway to get it ready.

“The resort is being readied. It is not receiving those guests, but Sunwing and Blue Diamond, along with the landlord, Hutchinson, are working feverishly to ready the resort, and within the next ten days the guests are all being accommodated in four-star accommodations at no extra cost to them.”

Minister for Grand Bahama Dr Michael Darville said the arrival of Sunwing’s flight is good news for Grand Bahama, despite negative reports published in a local newspaper regarding the delayed opening of the resort in Lucaya.

“It is truly unfortunate that the Member of Parliament for East Grand Bahama, Mr Peter Turnquest, whose brother is the project manager for the renovations, is either fully aware or has easy access to the facts surrounding this unforeseen delay, yet would use this opportunity to create unnecessary alarm and confusion as it relates to our partners and the Sunwing Group,” he said.

He said although the Memories Resort Grand Bahama is not open as anticipated, the visitors are being accommodated in a superior facility at The Grand Lucayan Resort, at no additional cost.

“We are all excited about this new addition to the tourism product on Grand Bahama, and for the increase in stopover visitors, which is indeed a boost for our local economy.

“I must say publicly that the delay in the opening of Memories Grand Bahama Resort is very unfortunate, and is a direct result of the delayed shipping of some of the essential kitchen equipment because of adverse weather in the Northern United States.”

Minister Darville said that up to one week ago, during their tour of the new Memories Resort Grand Bahama property, the project manager for the renovations, Mr. Lionel Turnquest, who happens to be the brother of the MP for East Grand Bahama, Mr. Peter Turnquest, assured the government, and by extension The Ministry of Tourism and The Ministry for Grand Bahama, that the renovations were on schedule and the resort would open on January, 16, as previously scheduled.

He said that Mr Turnquest has personally assured him and the Director General of Tourism David Johnson; and the senior policy advisor of the government, Sir Baltron Bethel, that the remaining work was minor and would not affect the opening date of the resort.

“Upon completion of the tour of the facility and based on the update from Mr Lionel Turnquest, I made a public statement confirming the opening date of January 16, 2014. Nevertheless, I was informed only yesterday, that some of the kitchen equipment and other supplies did not meet the shipping date.

“It is important to point out to the general public that all of Sunwing’s flights to Grand Bahama are on schedule… I would like to point out once again that at no point was this delay anticipated and it was a direct result of an unforeseen act of nature. The government and our partners, the Sunwing and Hutchinson groups, are fully aware of these circumstances.”

Minister Darville said that representatives from his Ministry and The Ministry of Tourism are on site and have been reassured that teams are working around the clock to complete all minor repairs for the handover of the property to the Sunwing Group.

As the Hutchinson Group of Companies and The Sunwing Group are working assiduously to resolve the few outstanding matters, Minister Darville said it is anticipated that Sunwing Memories Resort Grand Bahama will be open within two weeks.