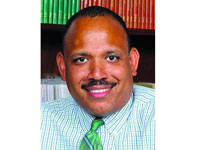 Five hundred and nineteen people were shot or stabbed in 2013 according to official Princess Margaret Hospital statistics – yet only 10 attempted murders were recorded by the Royal Bahamas Police Force for the same period.

It is unclear whether the incidents recorded by the Princess Margaret (PMH) were classified as serious or not by the police force.

Nonetheless, the statistical disparities raises questions about the classification of criminal activities and the possible manipulation of crime statistics, Dr Duane Sands, Director of Accident and Emergency at PMH, told The Tribune yesterday.

His comments come at a time when members of the public continue to question the accuracy of crime statistics provided by the police force.

“There seems to be a significant difference between the numbers we presented at the hospital and the numbers reported by the government or the police force,” Dr Sands said.