Christie is Most Incompetent PM Ever! 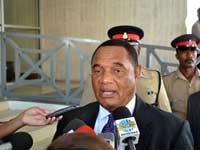 Free National Movement (FNM) Deputy Leader Loretta Butler-Turner said Prime Minister Perry Christie is the most “incompetent and irresponsible prime minister and minister of finance since the advent of Cabinet government in The Bahamas.”

“Bahamians do not trust the Progressive Liberal Party (PLP) on financial matters and are concerned about how the PLP is spending public funds,” she said.

“Even as the PLP is raising taxes and wants to increase the tax burden even more it went ahead and gave out $20 million dollars in untendered contracts in Andros. We can’t trust the PLP with our money.”

Mrs. Butler-Turner also questioned if the prime minister was in fact up-to-date with his real property taxes.

The government’s key man on VAT recently revealed that he was behind in his real property taxes, prompting the opposition to criticise the government.

The Opposition deputy leader also blasted the nation’s chief for saying that he will now look into finding which government officials are in arrears with their taxes.

“Why is he just doing this now, nearly two years after returning to office and on the eve of introducing legislation on VAT, legislation that has been postponed on three occasions by an incompetent government?” she asked.

Mrs. Butler-Turner insisted that the current government is one of double standards.

She added that according to the actions of some of them, it does not matter if taxes are raised or lowered, they simply do not pay them.