Lightbourne: IMF Did Not Force The Bahamas into VAT 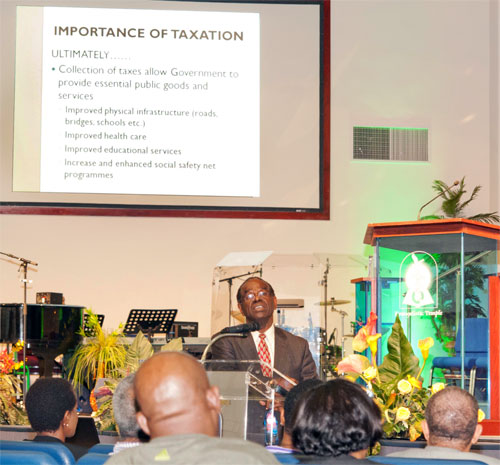 The country’s decision to implement VAT was not as a result of the International Monetary Fund (IMF) holding a gun to the head of The Bahamas government; Ministry of Finance Consultant Ishmael Lightbourne told dozens of people gathered at the Ministry of Finance’s VAT information forum at Evangelistic Temple recently.

Lightbourne pointed out that The Bahamas’ debt has skyrocketed over the past 20 years and Value Added Tax (VAT) is simply one of the many remedies needed to get the economy back on track.

Today, the country’s shortfall is five times more than what it was in 1993, said Lightbourne, a former Bahamas Chamber of Commerce president and former World Bank director. What started out as borrowing for capital expenditures for infrastructure – roads, hospitals and utility plants – has evolved into borrowing for everything from operating public corporations to paying salaries.

“If the IMF were in the position to force us to do anything, they would have done so 20 years ago,” Lightbourne said. “There is a great deal of misunderstanding about that. The IMF has made no threats and does not and cannot seek to impose their will on a sovereign government.”

He said VAT is the government’s effort to balance out the unsustainable inequity between what the country brings in as revenue and what it spends.

“Governments,” Lightbourne said, “have for the past two decades tried to fill the vacuum left by policies that once allowed foreign investors and developers to build without putting in their own capital investment in roads, utilities, parks and more. Succeeding governments were left to foot the bill but expenses were greater than revenue under an increasingly outdated tax system of heavy reliance on Customs duties.”

“For the past 20 years in the absence of major private sector investment this is what we have done. As a result, our debt has more than doubled and growth has been stagnant. So today we can no longer be inactive,” Lightbourne said.

For more information on the VAT implementation, please call the Ministry of Finance VAT hotline between 9 am and 5 pm, Monday-Friday at 225-7280.

You can also visit the official Facebook page at www.facebook.com/vatbah242.

Value Added Tax has been the ‘choice’ taxation method for over 160 countries worldwide since it was first implemented in 1950.

Caption: The IMF (International Monetary Fund) did not attempt in any way to force The Bahamas to impose a value added tax on goods and services, consultant Ishmael Lightbourne told a crowd gathered at the Evangelistic Temple February 12. The country’s borrowing over decades without sufficient revenue to handle the debt led to the current monetary position. (Photo by Derek Smith, Jr.)