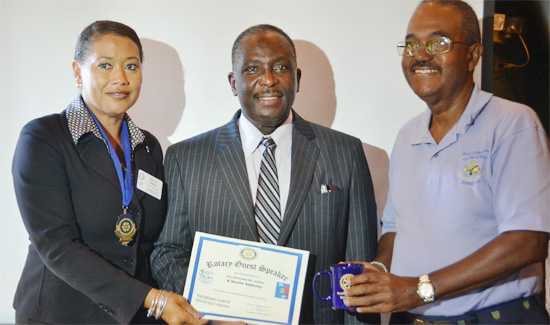 It’s a rare occurrence for justices, particularly Court of Appeal judges, to speak in public settings.

Justice Adderley’s 30-minute presentation at East Villa Restaurant Wednesday focused on the function of the Court of Appeal, how decisions are made in that court, and appeals emanating from those decisions.

Sworn in as a high court justice back in 2013, Justice Adderley spent 28 years practicing law, specializing in civil and commercial matters.

He came to the legal profession following a 10-year stint as a civil servant where he worked his way up to deputy permanent secretary in the Office of the Prime Minister in 1979.

According to Justice Adderley, the Court of Appeal is not a tribunal of facts. Therefore, no witnesses are called to give evidence, as is the case in the lower courts.

Rather, the high court deals with the question of law, relying on the transcripts of evidence taken in the lower courts and other documents filed during those proceedings, such as the judge’s decision and the reasons for that decision.

The Court of Appeal, Justice Adderley said, is concerned with whether the judge conducted the proceedings fairly and did the person at risk have a reasonable opportunity to be heard.

If a decision was handed down by a judge or magistrate it’s the Court of Appeal’s job to determine whether the decision was a reasonable one made on the admissible evidence before the court.

Other questions the court must satisfy for itself include, whether an error of law was made in the judge’s decision. Did the magistrate or judge provide a reason for the decision and whether the accused was informed of his statutory right to appeal?

“To set the judgment aside the court will have to be satisfied that no reasonable judge properly directing himself on the law would have reached the decision to which the judge came on the evidence before him,” said Justice Adderley.

It’s a concept that some lawyers seemingly do not grasp.

“The consequence is that some advise their clients to appeal cases when there is really little or no prospects of success,” said Justice Adderley.

In cases when a jury verdict is being contested, amongst the questions the Court of Appeal asks itself is whether the judge properly directed the jury on law and the various ingredients of the crime before its members began deliberations and whether the judge allowed evidence to be admitted that ought not to have been admitted and heard by the jury.

“When properly analyzed what emerges is that the substratum of all grounds of appeal really comprise errors of law, the breach of some aspect of constitutional rights, or procedural irregularity. These may substantially affect the merits of the case or the fairness of the proceedings in the court below,” said Justice Adderley.

“The grounds may result in the appeal being allowed, but if the court is sure that no miscarriage of justice has actually occurred, it may nevertheless dismiss the appeal. In appropriate cases, it will send the case back for retrial.”

In his experience many of the cases coming before the high court are frequently founded on the right of the person to be afforded a fair hearing within a reasonable time by an independent and impartial court – Article 20 (1) of the Constitution.

Some delays are systematic, such as the ones caused when transcripts of the court proceedings are not readily available. That, said Justice Adderley, is increasing in frequency lately.

Still, the vast amount of delays are caused by lawyers coming for adjournments, said his lordship.

“Mind you there are good reasons for the adjournments,” he said. “Of course the judge has a calendar so if you came for an adjournment today the judge may not be able to set you down for another six months.”

According to Justice Adderley when it comes to the Court of Appeal there is no backlog of cases, as is the case in the lower courts.

“If anything can be called a backlog it would be cases upon which it was not able to proceed because of lack of the records,” he explained during the question and answer period. “In the lack of the record [case] the onus of preparing that is on the system.”

“It’s not every day you get to hear about the inner workings of the Court of Appeal by a justice of that court,” said Rotarian Delmaro Duncombe. “It was very interesting.”