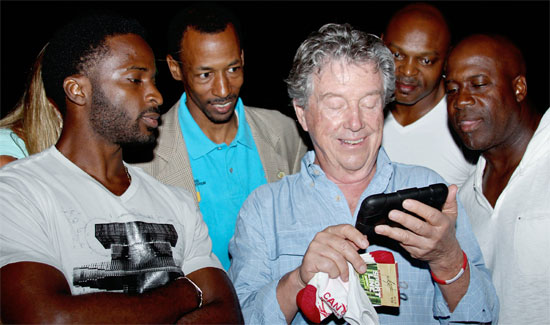 In another first for The Bahamas, Grand Isle Resort & Spa hosted a “Dinner of Champions” during the Olympics last month with decorated Olympians from two different countries.

The invitation-only soiree, held on February 22nd, served as the curtain call for the resort’s successful “Sochi Under the Sun” event. Four Canadian Olympians and two Bahamian Olympians mingled with the guests and shared their stories, followed by a Bahamian surf and turf dinner overlooking Emerald Bay.

Tim Munnings, the Director of Sports for The Bahamas, praised Grand Isle Resort & Spa for the unique event.

Accompanied by Munnings was Ramon Miller, gold medalist in the 4 x 400 relay at the 2012 Olympic Games in London.

“It was such an unusual opportunity to have these athletes at Grand Isle,” said Grant Castle, Executive Director at the resort. “Hearing their stories was truly inspiring for our guests, and it was the perfect send off for what has been a spectacular two-week event.”

Sochi Under the Sun, starting on February 9th, coincided with the Olympic Games in Russia. Ten Olympic athletes stayed at Grand Isle during this period, along with a handful of players from the National Hockey League (NHL). Golf tournaments, “mini- Olympics”, boating trips and road hockey games on Farmer’s Cay in the Exumas were just a few of the highlights in what is now billed as an annual event.

At the Dinner of Champions, Canadian Olympians Josh Binstock, Conrad Leinemann, Sami Jo Small and Rachelle Viinberg entertained the guests and showed off their gold and silver medals.In addition to money raised at the dinner, guests also bided on a silent auction. Proceeds went towards the Canadian Athletes Now Fund (CAN Fund) and Commonwealth Games Canada. All told, more than $40,000 was raised for athletes.

Munnings, the Director of Sport, expressed interest in getting Bahamian athletes and corporations more involved in the event next year.

The Dinner of Champions was the second high-profile gathering at Grand Isle in recent months. Back in December, the resort played host to Bahamas Speed Week and Deputy Prime Minister Phillip “Brave” Davis.

Grand Isle has become the official “Out Island partner” of Bahamas Speed Week. During the dinner, Davis announced the construction of a permanent track in Nassau for the event.

“Grand Isle is a gorgeous place for these types of events, and a big push for us is to place the amazing island of Exuma on the map,” said Peter Nicholson, an owner at the resort. “Annual and exclusive events like Speed Week and Sochi Under the Sun, we believe, will do just that.”

Grand Isle is one of the finest resorts in the Caribbean and the perfect location for a Bahamas Out Islands vacation. Ideally suited for family holidays, romantic getaways, destination weddings and honeymoons, or for simply enjoying the beach, a luxury villa vacation at Grand Isle is an experience never to be forgotten.

Villas are available for sale and rent. Reservations: 214-393-2841 (US direct) or reservations@grandisleresort.com. We can book your air and hotel for convenient one-stop travel planning and to ensure you get the best value. Real estate inquiries: 242.358.5243. Be sure to visit our Sales Office Center on property. Visit www.GrandIsleResort.com.