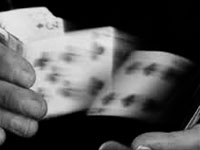 By all accounts, the public is increasingly becoming uneasy with this government and there are some who are demanding a Cabinet shuffle. There are certain PLP ministers who are sufferers of windbaggery and fictitious disease syndrome and, frankly, some of their performances in various ministries amounts to nothing more than a substantive negative outcome!

Unquestionably, those found to be deadbeats in the present Cabinet must be selectively separated or, in layman’s terms, “rolled out”.

It appears that the PLP, much like the FNM, has become home to a lame duck legion of political pretenders who should not offer in 2017. These MPs and persons seeking nominations should just ride off into the sunset, as they have had their chance and have done little more than bloviate during that period.

I can appreciate that unlike the backbenchers in the last FNM administration — who mostly sucked and kissed up — today’s crop of PLP backbenchers appears to be much more than government cheerleaders. I am impressed when I hear persons such as Andre Rollins and Greg Moss standing up, stating their views and demonstrating that, in those instances, their love of country surpasses their love of party. Sadly, the backbenchers of the previous FNM administration were, for the most part, echoing and supporting everything the executive branch/Cabinet did rather than raising questions and truly representing the interest of the electors.

I was informed that FNM Council members were ready to go to battle in Thursday’s council meeting, seeking to inquire as to when the next convention will be held. I have no doubt that the next FNM convention will be a brawl, a slugfest (politically and perhaps literally), finger-jabbing and ruffian-like browbeating affair. I’ve always held the view that in the wake of former Prime Minister’s Hubert Ingraham’s leadership of the party, FNMs are beating Dr Hubert Minnis with a political club as opposed to understanding that he is not Mr Ingraham or, for that matter, propping him up. It appears that Dr Minnis will be contested during the next convention.

I have also been informed of the PLP’s intention to have a convention later this year. However, I don’t expect much challenges — if any — to the leadership. The sheer goofiness of the upcoming convention and the political backstabbing leaves one to wonder about the future leadership and development of our country.

I think that both conventions should serve as a conscientious platform to address the entire electorate. Bahamians are sick of the blame game that politicians are known to play, whilst speaking about or promoting little to no innovative policy position. We’re tired of the same old, same old – tired of the old, played out attempts at furthering the concept of a personality cult! We want to hear the leadership of both parties proffer a vision for the Bahamas for the next ten to 15 years; we want to hear about a national development plan. We are tired of the five-year, dream-selling manifestos! How will we — the people — be economically and socially empowered?

Unlike the impending FNM showdown, if anything dares to challenge PM Perry Christie, he would likely crush all indications of a political insurrection with the overwhelming votes of a deck stacked with Christie-appointed stalwart councilors/delegates who are blindly loyal. There is no hope for any young turk in the PLP who wishes to unseat Mr Christie due to the mere fact that he has the numbers. As I recall the PLP’s 2009 convention, delegates/stalwarts seem to have voted in lock step and overwhelmingly like assembly-line drones, bringing back quite a few of that party’s senior citizens. That should not happen during the conventions of both the political parties this year. Both parties much adopt a futuristic outlook, building around young up-and-comers and paying their respect to past members by demonstrably holding them out as statesmen, as wise counsel/advisers and as persons whose contributions to the party and to nationhood must be celebrated.

As it stands, within both parties are frontline members who appear to be hamstrung by stupidity and unwilling to accept divergent opinions. These folks, in my opinion, are the “flammers”, hopeless liabilities and useless baggage that any astute politician/leader may have relegated to the political dustbin as they will undeniably be setbacks in what is expected to be a hotly contested general election in 2017.

With our country on the fast track to another record-setting year for murders, it is obvious that crime has gripped our society in a most undesirable way. Today, we’re at the point where young men are boldly and openly shooting each other in the day, with no regard for bystanders or caught.

It is obvious that some Bahamians have developed an American influenced outlook on violent crime, seemingly accepting it as an everyday occurrence. Indeed, we all need to become more involved in preventing vicious crimes. Bahamians have apparently become so tolerant of the idea that we must co-exist with a sadistic criminal constituent that of us are now seeing and hearing arguments escalate but failing to contact the police before tempers get so out of control that someone gets hurt or killed. This is wrong and reflects the emergent frame of mind that many Bahamians (particularly Nassauvians) are becoming indifferent to violence afflicting their neighborhoods, almost mirroring the attitudes of residents of antagonistic neighborhoods such as Compton, California, where gang activity reigns supreme.

Before the drug boom, the Bahamas was a rather peaceful society, and although there were incidents of petty crime (eg theft), there was hardly ever any occurrences of the vile, heinous acts we hear about almost on a daily basis.

We as Bahamians must find more effective ways to resolve personal conflicts. The use of a knife or a gun to cause harm or take people’s lives is a spineless, wretched approach to conflict resolution. In order to resolve our conflicts, we must learn to value our brains and our mouths. And, if all else fails, when there is any sign of unrestrained trouble… run and live to see another day! The problem with many of our youths today is just that, instead of running away from trouble, they run towards it, many times losing their lives or taking the life of someone else.

As I watched the video of the young man shot at the Chinese restaurant and the two youngsters who were shot a few days ago, one notes that far too many Bahamian young men and woman were murdered on the streets and cut down in the prime of their lives. In recent years, far too many youngsters contributed to the ever-increasing prison population instead of the upward mobility of Bahamian society.

It is high time that we learn to value the lives of others and begin to learn the worth of being our brothers’ keepers. When youngsters resort to outrageous slayings and burning people, kidnapping, stuffing people in the back trunks of vehicles and so on, we must really begin to assess the sociology and psychology of our society. From our homes to our classrooms, we must address the social issues confronting our society or bear witness the social collapse of Bahamian society.

As it relates to crime in the inner-city, the urban renewal programme has failed. Violent crime has skyrocketed since the introduction of urban renewal, and although the intent of the architect of the programme – Prime Minister Perry Christie – is commendable, he must awaken to the sad reality that this poorly-funded initiative has not strengthened the social fabric of our society nor has it led to the self-development and socialisation of a large percentage youths in the inner-city.