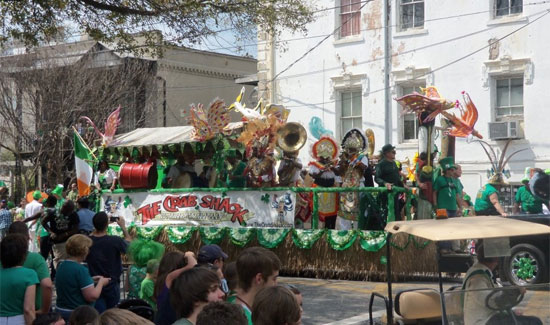 The junkanoo presence at the event has become so popular that on March 18, 2011, Mayor Jason Buelterman of the City of Tybee, officially declared that date “Barabbas and the Junkanoo Tribe Day”, as evidenced by the attached Proclamation. In addition to the Proclamation, the group also received the key to the City of Tybee Island, and they have been made Honorary Deputy Sheriffs of Chatham County.

It is estimated that the 2012/2013 parades hosted in excess of 500,000 spectators in Savannah, the second largest gathering in the United States outside of New York. The group’s performances were recorded and members were asked to sign waivers authorizing the Tybee Island Tourism and Promotion board to use the footage for their Tourism campaign. This commercial, featuring the Junkanoo performance along with celebrities such as Paula Deen; famed restaurateur and former Food Network star, can now be viewed nationwide in the US or by logging on to tybeevisit.com/

Leader of the group, Quinton ‘Barabbas’ Woodside stated: “It is amazing how many contacts we have made with persons from around the world just by throwing small business cards from the float in Savannah. Some of these persons request performances in their home state for events such as college fairs, best of the bands etc.

In addition we get tons of requests for the recipes for the many tasty Bahamian treats that are prepared during the St. Patrick’s Day week.  The group has also become a regular part of the Sunday worship experience at All Saints Episcopal Church on Tybee Island where we perform during the service as well as afterwards at a hosted pot luck brunch by enthused parishioners.”

Barabbas also explained how this amazing cultural exchange has fostered positive tourism benefits for The Bahamas as well since visitors travel here as a direct result of seeing the parades in person, on You Tube or facebook and get in touch with the group. The junkanoo group has also been invited to be a part of and provide entertainment for visitor weddings held here in The Bahamas or have attended retirement parties of repeat visitors from the Georgia area, giving credence to the fact that junkanoo certainly has a role to play in enhancing the tourism product. 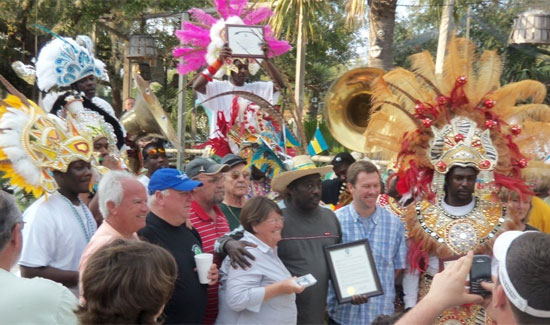 However, it has not been an easy road for the group which has to solicit financial assistance annually from the general public, corporate sponsors, and government entities to cover their travel costs and expenses. The performers have always been selected from various Junkanoo groups with sponsorship being offered to deserving youngsters to provide them with the opportunity to express their creativity through their culture.

This has been a sore point with the junkanoo leader as he expressed his frustration: “It is heart wrenching to see the expression on the faces of young performers, some traveling abroad for the first time to represent The Bahamas, as they wait sometimes until the final hour before departure, to find out whether word from a donor would seal their fate or grant them an opportunity of a lifetime.

Last year after hearing that the group might not make it to Georgia because of financial difficulties; a Tybee Island, Ga. business owner opted to send a donation of $1,000.00 to assist with travel expenses stating that because of the amount of patrons at our establishment when the Junkanoo band is here on the island; it’s the least we can do. It is amazing how others can appreciate our culture and strive to promote it, when our own people don’t share the same passion.

“My wife and I have sacrificed and invested to the point where every year we are left with a new personal loan with the hope of paying it off before the next parade comes around. We have tried repeatedly without success, to get the attention of the persons in authority to organize a system where we can travel with ease without having to burden the same few people to make this event happen.

“It is our desire to sit with government officials to map out a strategy whereby the group can comfortably afford to travel as cultural ambassadors. It has been suggested for the past 3 years that packages can be offered to Bahamians to travel to Georgia to participate in the excitement, as well as visitors in the Atlanta and Carolina areas.

In fact we are in the planning stage of designing lightweight costumes that can be sold to persons wishing to participate in the parades on Tybee Island and Savannah. We would also like to be able to afford to ship a 40 ft container to the parade as this could hold larger dancer costumes and other instruments to enhance the parades.”

In spite of the challenges the show must go on. Undeterred and determined in their quest, this group of cultural ambassadors has its bags packed ready to travel and share their junkanoo passion with the world.