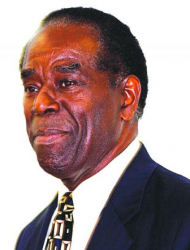 Sources to BP confirmed locksmiths representing First Caribbean Bank International showed up early this morning at Lightbourne’s palatial beachfront home out west to change the locks on his property.

The home has been in foreclosure and, with judgments from the courts, was ordered to be seized by the bank.

The last attempt by the bank to take possession of the residence a few weeks ago was stopped after Prime Minister Christie intervened.

Mr. Christie told Parliament a few weeks ago: “I knew he was challenged and didn’t have any money. I knew he had descended to the bottom, one who had been at the top, and I knew he was entirely to blame for the error of judgment that he made. But this is a man with a wife and children, a wife who was grievously ill. I called the managing director of the bank and asked the managing director, she was travelling, I said please call me. She called me. (I said) what can I do as prime minister to stop this man from being put out his house today?”

One must ask now: What makes Lighbourne sooo special to the Christie Regime?