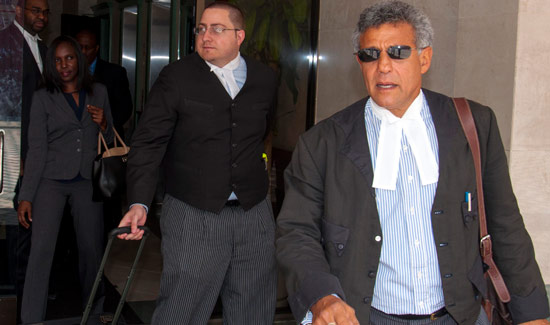 Bahamian law has been repeatedly ignored to the benefit of wealthy developers thanks to a “culture of subservience” among civil servants, attorney Fred Smith, QC, told the Supreme Court.

Presenting the case for judicial review of the Blackbeard’s Cay development, Smith said the evidence pointed to a “tsunami of disregard” for due process and the rule of law as civil servants simply rubber-stamped approvals for the project at the behest of their superiors.

“The facts of the case evidence what I could term an endemic subservience, an institutional subservience entrenched in the civil service, to cater to ministerial dictate,” he said. “The Cabinet and the minister are regarded as the extreme authority on what should happen, regardless of what parliament has legislated.”

According to Smith, the Blackbeard’s Cay project moved forward in the absence of necessary site approvals, environmental studies, public hearings and proof of the developer’s compliance with mandated conditions.

In allowing this to happen, he said, the government contravened the provisions of the Planning and Subdivisions Act (PSA), the Conveyancing and Law of Property Act (CLPA) and the Marine Mammal Protection Act (MMPA).

Smith urged the court to view the application for judicial review as a “seminal opportunity to reestablish the rule of law and bring an end to ministerial dictate.”

His clients, environmental watch group reEarth, are challenging, among other things, the Minister of Agriculture and Fisheries’ decision to grant licenses for the importation of eight dolphins from Honduras to be used as attractions at the development.

As an example of the arbitrary of power of ministers, Smith pointed to the “flurry of activity” that surrounded the granting of these licenses on July 19, 2013. In a single day, he said:

• Director of Marine Resources Michael Braynen sent a memo about the applications to the Minister, V Alfred Gray

• The minister considered and approved the applications, and communicated this to the permanent secretary and director

• The director issued the licenses

• A receipt was issued

• Blue illusions paid a $10,000 fee for this license and was issued with a receipt

Smith argued that considering the slow pace at which the civil service usually moves, the activities of July 19 represent an unusual level of haste and coordination.

Either the documents produced by the government are inauthentic, he said, or there must have been a good reason for the rush.

Noting that a health permit allowing the dolphins to be exported from Honduras was due to expire just five days later, Smith suggested that the developer’s concern was the source of the government’s sudden urgency, and led to the procedures mandated by law being ignored in the haste.

“The only consideration taken into account was the developer’s need to beat the deadline,” he said.

Government officials have maintained that Blackbeard’s Cay and its developer, St Maarten businessman, Samir Andrawos, possess all the required planning and marine mammal approvals to operate the project.

Craig Delancy, the Ministry of Works’ building control officer, said in an affidavit: “In all the circumstances, Balmoral Island and/or Blue Illusions [Mr Andrawos’s company] have met all the requirements, and have in their possession, all the requisite permits from the Ministry of Public Works and Urban Development for Blackbeard’s Cay, the Welcome Centre at Balmoral, and the Water Park, restaurant and bar and gift and souvenir shop at Balmoral Island.”

But Smith countered that the government has not produced evidence to support this assertion, having failed to comply with a Supreme Court order that all relevant licenses, leases and permits – and the documents upon which they were based – be provided.

In particular, it is claimed that the dolphin import permits were issued to an unlicensed facility and in the absence of evidence that the importation was necessary for the preservation of the dolphins, for scientific research or for educational purposes, as mandated by the MMPA.

“You can’t just import dolphins for the entertainment of cruise ship passengers, or anyone else,” Smith told the court.

According to affidavits filed by reEarth’s Sam Duncombe and Sonya Alvino, the dolphin attraction is being conducted on 2.47 acres of Crown Land seabed, even though the terms of the lease state specifically that the area can only be used for a stingray attraction.

Smith told the court that the dolphin importation should never have been approved because the facility is exposed to adverse environmental factors that will not only affect the wellbeing of the marine mammals but also the island and its environment. He said the location is “unsuitable in almost every respect” according to the stipulations of the MMPA.

In visits to the island in June and September of last year, Duncombe and Alvino claim they noticed that the facility lacks the ability to quarantine animals properly and thereby prevent the spread of disease.

They said the dolphins are exposed to high levels of ocean noise which can deafen them, that the facility has no protection from hurricanes, ocean surges, or the sun, and that the water depth is insufficient.

Duncombe and Alvino claim that despite frequent letters, phone calls and emails requesting information on the project, they were stonewalled by an array of government officials.

Responding to applicant’s case, Gary Francis from the Attorney General’s office denied that there had been any attempt to circumvent the law.

He argued that although his office had not produced documentary evidence reflecting every stage of the approvals process, this does not mean the process was unlawful.

“They didn’t give approval in a vacuum,” he said.

However, Justice Stephen Isaacs, who is presiding over the case, pointed out that based on the documents before the court, that remains unclear.

“In the absence of something, there is nothing,” he told the attorney.

“We produced the documents we could find,” Francis explained.

He said that without evidence to the contrary, there must be a “presumption of regularity” on the part of government.

He added: “If it was granted, and there was the authority to grant it, it was not unlawful.”

In response, Smith’s colleague Dawson Malone reminded that court of its order that all relevant documents be produced, asking the court to assume that any document not provided does not exist.

“No evidence has been put before the court which explains the process by which these decisions were made,” he emphasized.

Caption: DEFENDING THE LAW – Fred Smith, QC, and his Callendars & Co. team leaving court. Presenting the case for judicial review of the Blackbeard’s Cay development, Smith said the evidence pointed to a “tsunami of disregard” for due process and the rule of law as civil servants simply rubber-stamped approvals for the project at the behest of their superiors.