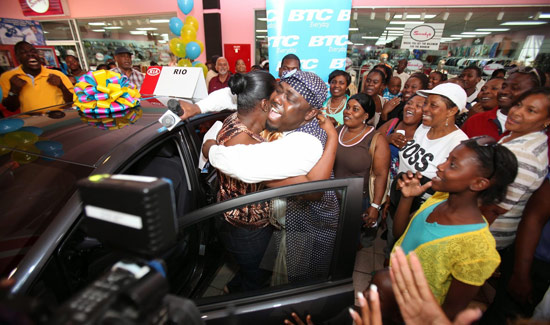 Winning a new Kia came as a big surprise to Gabriella Evans even though she had good odds – a one in five chance – as a finalist in BTCs recent “Text 2 Win” mobile phone contest.  But win she did!

With crowds packing the Mall at Marathon Centre Court to witness the Finals last Saturday April 26th and to enjoy the festive atmosphere, music and prize-winning games with Karaoke King Demetrius, Gabriella Evans from New Providence picked key number 4 out of the bag which proved to be the winning Kia key.

“I was so surprised – I never thought I would be the winner,” said the young mother who until her win, caught the bus to her job at Columbian Emeralds.

“I was overwhelmed, speechless and of course I cried!  I thought I was going to pass out.  Good thing my sister Nela was with me,” said the loyal BTC Facebook fan who added her thanks to BTC and said that she really appreciated the opportunity to win.

Gabriella qualified for the draw along with 9,500 others who over a two-week period had for the most part, answered correctly, 3 daily trivia questions.  The names of five finalists were randomly ‘pulled’ from the qualifying pool of entries and attended the Finals at the Mall.  Glenda Roberts and Deangelo Greenslade of Grand Bahama, and Jamie Bethel, Gabriella Evans, and Vanice Carey from New Providence each took their turn picking a key from the bag.  The correct key would open the new $30,000 Sanpin Kia motorcar and bring ownership of a Samsung S4 LTE smart phone.  Each of the Finalists also went home with a Samsung S4 LTE.

Senior Manager of Public Relations Jerome Sawyer said lot’s more contests were on the way, and urged everyone to visit the BTC Facebook often for details on daily trivia as well as the big promotions.

“We love doing these customer appreciation promotions,” said Mr. Sawyer, “and the “Text 2 Win” games always get a good response. We are thankful to Sanpin Motors for partnering with us on this particular contest. The Kia is a great brand and the chance to win a Rio model helped boost the response.”

To participate in the “Text 2 Win” contest BTC customers had to initially text “CAR” to 5007 and to qualify to win, answer a total 25 questions correctly, over a two week period. Over 140 daily prizes, which included $1,000 in mobile credit, smartphones, gift certificates, phone cards and more, were given away during the promotion which was open to all BTC customers, between April 8th – April 22nd.

Each finalist received a Samsung S4 LTE smartphone and the opportunity to pick one of five keys – one of which resulted in the winner driving away in the new Sanpin Kia Rio.

The  “Text  2  Win”  contest  is  just  the  first  in  a  series  of  exciting  promotions  that  BTC customers will be able to enjoy, throughout the year.

“This is just the beginning,” said SVP of Brand & Communications, Marlon Johnson. “We were happy to partner with Sanpin Motors for the car giveaway. Thousands of customers took part, and we want to continue with the excitement of the ‘Text 2 Win’ contest each month with big prizes, surprises and even more chances for customers to win.”

Top: Karaoke King Demetrius hugs Garbiella Evans – she is named the winner of the new $30,000 Sanpin Motors Kia Rio in the BTC “Text 2 Win’ Finals at the Mall at Marathon.

9775  Garbiella Evans, winner of BTCs “Text 2 Win’’ contest with her prize of a new Kia Rio from Sanpin Motors.