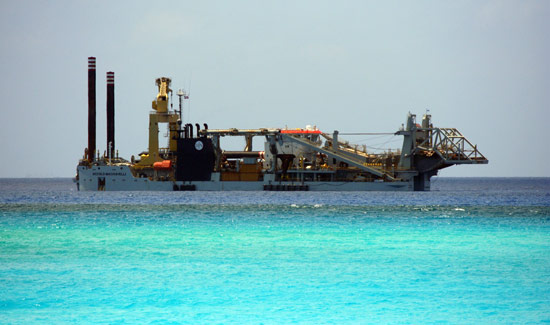 A mammoth seafloor dredger, dubbed ‘The Reef Destroyer’ by local environmentalists, has arrived in Bimini as developers forge ahead with construction of a controversial ferry terminal despite a top judge’s stern warning.

The 450-foot, 1,200 ton Niccolo Machiavelli is a specialized cutter-suction dredger designed to break up hard material which standard dredgers cannot remove. It is among the most powerful machines of its kind, and is set to be unleashed on one of the most pristine and significant marine ecosystems in the world, environmentalists say.

“That monster dredger cannot be allowed to tear up the seabed off the coast of North Bimini,” said Fred Smith, QC, attorney and one of the directors of fast-growing environmental movement Save The Bays. “There are 14 world-class dive sites and some of the most sensitive and important reef systems on earth there – many of them directly in the developers’ intended path of destruction.

“Resorts World Bimini is being allowed to move full speed ahead by a government that has failed in its mandate to act in the interest of Bahamians – and this despite a strong warning from one of the country’s top judges.”

Last month, Court of Appeal Justice Abdulai Conteh told lawyers for the government and Resorts World Bimini that construction should not be allowed to progress while the project is being challenged in the courts.

“In a democracy, no self-respecting government would do anything to jeopardize proceedings before the court. When there is a contested issue, one should not change the facts on the ground until a decision is made,” the judge said. “It’s more than a precept, and it is applicable in the Bahamas – it’s about the rule of law.”

Justice Conteh’s comments came as part of the ongoing appeal by Save The Bays and the Bimini Blue Coalition against a Supreme Court’s ruling that unless Smith’s clients pay a collective $650,000 ‘security for costs’ to the government and Resorts World Bimini, their judicial review action would be dismissed.

“Clearly, this administration has no self-respect,” Smith said yesterday. “The justice spoke to the grave implications if work continues, but the government has obviously given carte blanche to the developers, and they are racing ahead to get the work done before justice can run its course.

“This is always the way in the Wild West development show that this country has become. By the time a court can decide if a project is being undertaken according to the law, it is already a fait accompli, the environment has already been irreparably damaged, and local communities have already been overwhelmed or displaced.”

Smith noted that following Justice Conteh’s remarks, the attorney for Resorts World Bimini promised the Court of Appeal his clients would do nothing without the appropriate permits.

“The responsibility for this falls squarely in the lap of the government,” Smith said. “If work is continuing it is because they are allowing it to continue. They continually bow to the will of wealthy developers and the Bahamian people are always the losers in the end.”

On April 25, Smith wrote to the Attorney General’s Office urging the government not to do anything to jeopardize the Bimini judicial review proceedings.

“We would be grateful if you could urgently revert with confirmation that your respective clients will maintain the status quo (by which we mean, not carry out or allow the carrying out of any further changes to the development site including construction or pre-construction operations” the letter said.

In a letter to Resorts World Bimini, sent on the same day, Smith asked the company to confirm whether the government had granted any permits, licenses or approvals in respect to the development.

Smith said there has been no response to either letter to date.

Meanwhile, a recent presentation by marine biologist Dr. Kristine Stump demonstrated that under successive developers, the Bimini project has already had serious negative effects on the marine environment.

The results of her study showed declines in several important fish species that occurred after mangrove deforestation.

“We found acute and chronic effects on not only the sharks, but also the entire marine community following the development within the lagoon,” Stump told the dozens of scientists and conservationists attending an international conference in Nassau.

The waters around Bimini are home to a plethora rare and important marine species, including the endangered small-toothed sawfish.

The Niccolo Machiavelli is a cutter-suction dredger equipped with a rotating cutter head for breaking through hard materials such as compacted sediment and stone. The material is then sucked out by dredge pumps. The vessel can dredge to a depth of 35 meters and exerts a cutting power of 7,000 kW.

It is named for the 15th century Italian thinker whose notoriously cynical political theories gave rise to the expression “The ends justify the means.”

Captions:
REEF DESTROYER – The Niccolo Machiavelli dredger anchored off the coast of Bimini. The mammoth 450-foot vessel is to be used as part of the controversial construction of a 1,000 foot pier and ferry terminal by Resorts World Bimini. A top judge has warned that continuing to work on the project while it is being challenged in the courts could have serious implications for the rule of law in the Bahamas.

BUSINESS AS USUAL – Environmentalists in Bimini say work on the ferry terminal is continuing despite Court of Appeal Justice Abdulai Conteh’s statement that the facts on the ground should not change until justice has run its course. Opponents of the development have circulated photos of newspapers dated after the judge’s remarks, with work underway in the background.