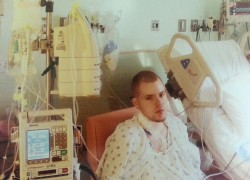 Just days after the Bahamian men accused of the attempted murder of a Canadian tourist on Christmas Day 2010 were acquitted of the charges, the visitor to The Bahamas has issued a warning to others seeking to vacation in the country, according to online reports.

New Brunswick resident Mitch Nini told Global News that he wanted to remind anyone travelling to The Bahamas that this country is not safe.

“Anyone who goes there isn’t immune to the crime there,” he said. “Whether you feel like you’re safe on the resort, as soon as you step off the resort you’re in a war zone.”

Patrickedo Rose, Dino Price and another man, who was a minor at the time of the incident were found not guilty of attempted murder and armed robbery.

It was alleged that the men attempted to kill Nini by stabbing him several times to the back, chest and abdomen early that Christmas morning and robbing Mintez Armbrister of a gold chain valued at $1,000.

“I didn’t think twice, I was already out of the vehicle trying to stop him,” Nini said in an interview with Global News. “He had started to slow down, when a vehicle pulled up and someone got out of the back seat and pulled out a knife.” “I had grabbed him by the shirt and I was struggling with him, on the ground, but simultaneously he was stabbing me along my body.”

The online report said Nini’s friends drove him to a hospital where he needed six litres of blood and several surgeries.

While he could recall a gold Nissan Maxima, he could not remember the faces of the man who stabbed him.

A jury reached a six to three not guilty verdict in the Supreme Court last Tuesday.

As it stands now Canadian government does not have any advisories when travelling to The Bahamas, only that tourists have been the targets of robberies, and not to carry large sums of cash or wear expensive jewellery.

Click here to read the complete article at Global News