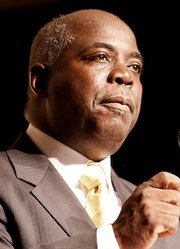 In one of the stupidest things he said, since explaining that he was “providing legal advice” when police found him with a prostitute in his car at 3:00am, Deputy Prime Minister Philip “Brave” Davis’  said that Bahamian politicians need an increase in pay so they won’t be tempted to take bribes and steal the public’s money.

Mr Davis told a reporter that: “(it would) remove the temptation for politicians to do things that are not right. Because if they (MPs) are earning a living by doing this, then there would be no need for them to do anything else, I think that’s what the Bahamian public has to understand.”

The fact that they were elected to serve the public with honesty and integrity apparently does not matter.

In other words, Davis admits that Bahamian politicians are, for the most part, greedy and crooked.  But he says paying them more will make them stop.

Can you imagine if an employee of Super Value came to Rupert Roberts and told him that he would steal less from the store if he received a raise.

How fast would that idiot be shown the door?

In response, Free National Movement Deputy Chairman Dr Duane Sands said the government must set in motion radical changes to procedures of accountability before salary increases for Members of Parliament are considered.

Dr Sands told the Tribune that the Bahamian economy’s condition is simply too fragile to prioritise higher wages for MPs.