Two Years On – PLP Can Boast of Few Accomplishments 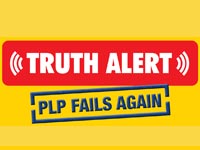 With May 7 only days away, the fortunate members of the clique within the Gold Rust administration of Prime Minister Perry Christie are probably gearing up to hold a low-key commemoration of its 2012 general election victory. The PLP government knows full well that it had better not engage in any ostentatious victory celebrations and not allow its elite members to be seen downing bottles of Dom Perignon champagne on May 7, as this would only remind the Bahamian masses of their failure to fulfill the many infeasible promises in the Charter for Governance.

For instance, the PLP promised Bahamians that it would create 10,000 jobs within the first year of its administration. It has since had to backpedal on that promise. The PLP also promised to set up a national health insurance scheme and a mortgage relief program to assist hundreds of distressed mortgagees. PLP MP Dr. Perry Gomez, who has responsibility for the Ministry of Health, continues to give the appearance that the plan, which has an exorbitant price tag, will come to fruition. The Whistleblower expects this initiative to come to naught, as has been the case with many of the PLP’s election promises.

The first mortgage plan has failed to assist the 1,500 persons that PLP said it would. And even its scaled down version has been a complete flop. The PLP had made hay out of the 2011 murder record count of 127. PLPs such as Keith Bell blamed the murder crisis on the FNM’s decision to water down former Governor General A.D. Hanna’s brainchild, the Urban Renewal Program. The PLP, upon taking office, established Urban Renewal 2.0 and Project Safe Bahamas, both of which have yielded very little fruit, in terms of stemming the tide of murder.

There were 111 murders in 2012, 119 in 2013 and over 40 in the first four months of 2014. Criminal gangs have run amuck in the dirty, crime-ridden PLP communities of Englerston, Bain and Grants Town and other over-the-hill areas and the police force and its Commissioner Ellison Greenslade, seem to be overwhelmed and frustrated with the PLP’s constant political meddling in the force. Ellison and the PLP’s once cozy relationship appears to have deteriorated.

With the FNM and Hubert Ingraham no longer in office, Keith Bell and the PLP no longer have the luxury of blaming the former PM and the last government, as they were accustomed to doing while in opposition. The Whistleblower hopes the FNM does not follow the PLP’s example of posting massive billboards displaying the murder count throughout New Providence. We don’t need that kind of publicity. The U.S. Embassy has issued at least six travel warnings for The Bahamas to its citizens since the PLP took office.

The PLP has a few accomplishments. The Gold Rust administration established its National Training Agency in New Providence and in Grand Bahama, which to some objective and fair Bahamians is eerily similar to the FNM’s 52 weeks National Jobs Readiness and Skills Training Program. The PLP has also pumped $20 million into its Bahamas Agriculture and Marine Science Institute in North Andros, which is PLP country. The Whistleblower was reliably informed that the $20 million in contracts were issued to PLPs. No surprise there.

Another accomplishment of the Gold Rust administration was the establishment of a ministry for Grand Bahama, headed by Pineridge MP Dr. Michael Darville. This is a ministry with an undefined portfolio. Darville is really a glorified secretary of the Christie Cabinet. And finally, the Gold Rust administration was successful in getting CWC to transfer two percent of its 51 percent of its controlling shares to the recently established BTC Foundation, although this was not what the PLP had originally set out to do. It wanted to regain the majority of shares. That was one of the PLP’s major pledges on the campaign trail.

While thousands of ordinary PLPs continue to languish, the wives, children, concubines, bastards, special interest groups and cronies have eaten the fat of the land. The Gold Rust campaign was the greatest hoax foisted upon the Bahamian people. Many gullible Bahamians gobbled it down hook, line and sinker. Bahamians are now rating the current Gold Rust administration of PM Perry Christie as the most scandal ridden in the history of the modern Bahamas.

The Whistleblower disagrees with this observation, although he thinks these people are making an impressive argument for their position. The Pindling governments of 1977 to 1987 were the most corrupt and scandal ridden in Bahamian history. Those administrations take first and second place for the most scandal ridden award with ease.

There is a dead heat race for third place between the first Christie government of 2002 to 2007 and the last UBP government which fell to the PLP in 1967. Fourth place goes to the last Pindling government. The current Gold Rust administration, in its first two years, is in fifth place. But at the rate it is going, the Whistleblower might have to bump it up to second in another year or two.