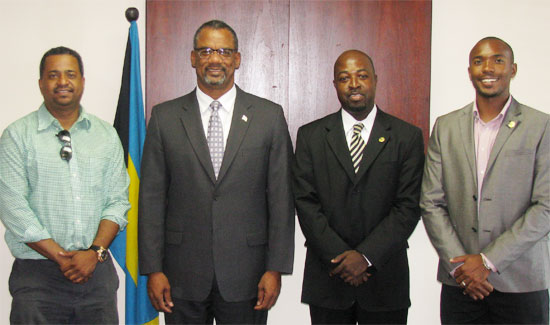 The First Bahamas Branch of Toastmasters International, Club 1600 paid a courtesy call on the Minister of Education, Jerome Fitzgerald, on Tuesday, August 6, at the Ministry of Education.

During the brief meeting, newly installed president Valentino Munroe said he was pleased to meet with the Minister to discuss Toastmasters Club 1600 registration process in order to become a ministry certified leadership and communications training institution in The Bahamas.

For the past 45 years, Club 1600 has successfully trained young men in the art of leadership and communications.

The club views this certification process as another step in its development.

Previously residents of the Elizabeth Estates Children’s Home and participants of the T.A.R.A Project have benefited from the program hosted by Club 1600.

Later this month the club will hold its annual back-to-school drive in Union Village. The event was launched in 2012, to honor the late Toastmaster Neil Percentie, following his untimely demise.

Minister Fitzgerald says he is interested in healthy social outlets for young adults and he looks forward to attending the Neil Percentie back to school event in Union Village.

According to Mr Palacious, the Union Village event will not only provide students with back to school material, but also offers youths guidance to make the most of the upcoming school year.

Caption
Toastmasters Club 1600 paid a courtesy call on the Minister of Education, Jerome Fitzgerald, on Tuesday, August 6, at the Ministry of Education.