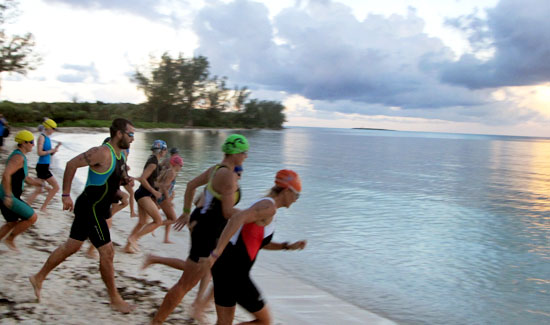 Conditions could not have been better for the warm up event to this years Potcakeman Triathlon. The calm water at Jaws Beach awaited the participants who were competing in the first Super Sprint Mixed Team Relay event on Sunday. Teams were made up of 2 men and 2 women, each member completing all three legs of a shortened swim, bike then run course before handing over to the next person. 13 teams battled it out in a tightly fought race which was eventually won by team ‘If You Cant Beat Em Join Em’  anchored by Cameron Roach.

It was a fun and informal event with great camaraderie and everyone cheering until the last person had crossed the finish line.

“Sending a team to the Commonwealth Games in 2018 is our ultimate goal’ said Event Director Lori Roach. ‘We had participants as young as 9 years old in this race who did incredibly well.  Many people completed their first ever triathlon, which is a great achievement. We’re even more excited now for the ‘main event’ on Saturday 20th September. ‘

The second annual Potcakeman Triathlon is gearing up to be the biggest race on the Bahamas Triathlon calendar.  The swim-bike-run route starts in the ocean at Jaws Beach for a 750m swim, cycle for 21km to the end of Frank Watson Blvd before returning for the transition into a 5km run along the trails of Clifton Heritage Park. Following the adult race there will be a “Puppy Tri” for children ages 6-15, featuring a course of 100m swim, 5k bike and 1k run.

Presenting sponsor Powerade will be providing refreshments at all aid stations. The triathlon will also feature chip-timing courtesy of Purina, which automatically times racers as they cross each transition area and then at the finish line. All competitors will be rewarded with a Subway sandwich and Sands Light Beer at the finish.  Kids will get to enjoy a Dairy Queen Dilly Bar. While racers are out on the bike course, spectators will be able to participate in a paddleboard clinic organized by PappaSurf and can sign up for their Conchanoo SUP Challenge that day.

“Once again we are going to see who is the best triathlete in Bahamas’ said race director Sarah Kennedy from Baark! ‘Both the male and female winners from last year have signed up to defend their titles’.  But its not all for the competitive natured she emphasized ‘We already have over 20 people taking part in their first triathlon.  Our race is fun and they’ll be great support every step of the way.  Our motto is ‘you don’t have to win, you just have to tri ! ‘.

There will also be a raffle draw, top prizes including Micargi Avant road bike donated from Cycles Unlimited and golf for 4 at the Ocean Club.

There are still spots available to compete and race directors remind people to sign up online before registration closes at midnight on September 16th.

More information and registration link can be found at their website www.potcakeman.com 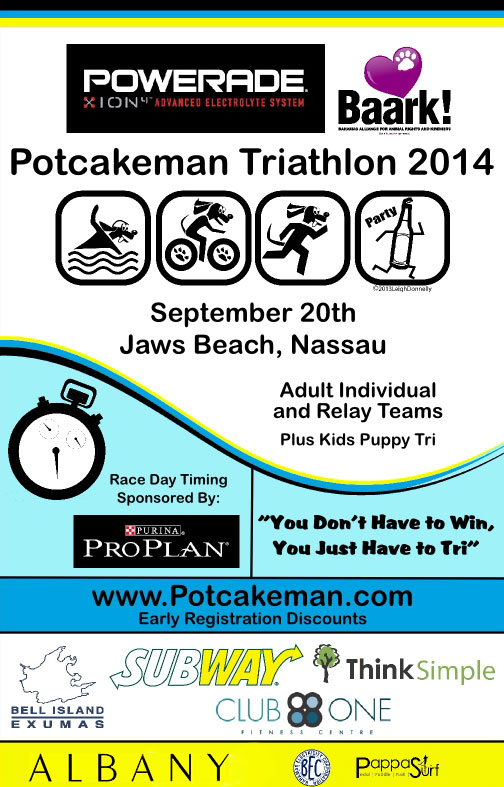