The Alfred Gray Affair: A Grave Crisis for the PM & the Judiciary 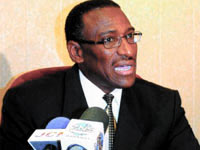 From the moment Agriculture and Marine Resources Minister V. Alfred Gray offered the Mayaguana Island Administrator certain advice about a criminal case involving a constituent, he breached a wall of separation between the Executive and the Judiciary.

For this grave breach he must resign forthwith or be immediately fired by the prime minister.  Temporarily relieving Gray of the Local Government portfolio is a stalling tactic, makes a mockery of the system and suggests a bunker mentality in the government.

Gray has admitted to discussing the case with the Administrator telling him that he could release the man charged on bail.  This is a clear cut case.  There need be no more investigation as to whether Gray should resign or be fired.

The only outstanding question is whether Gray should be criminally charged.  What should be investigated are the details and the full nature of the breach by the MICAL MP, who is also an attorney.

There are two major issues at stake: The independence of the Judiciary and any remaining credibility of Prime Minister Christie and his government already seriously damaged and compromised by the grave breach of the public trust and parliamentary conventions by DPM Philip “Brave” Davis who recently misled the House and who must also resign or be fired, in what is also a clear cut case.

A minister misleading parliament and a minister perverting the course of or obstructing justice are both cardinal sins in our system of government.  Both require a minister to resign.  Even with compelling evidence of ministerial misconduct, in the PLP there appears to be no consequences for ministers who breach public standards and conventions.

If Gray remains in the cabinet, the prime minister and his entire government will be complicit in perverting the course of justice.  The Alfred Gray matter presents a crisis for the Prime Minister and for the Chief Justice and Chief Magistrate.

The prime minister cannot possibly let stand a minister telling a judicial officer what he could or could not do.  And the Chief Justice and Chief Magistrate cannot allow the Judiciary to have its independent authority usurped by a cabinet minister.  If Gray remains in office, our system of justice is at risk to all manner of future interference by cabinet ministers.  This cannot be overstated.

Once the Administrator heard the case and ordered the convicted person to prison he had no further authority to deal with the matter. The police had a responsibility to carry out the decision of the court and present the individual for incarceration.

If the convicted felt aggrieved and was determined to appeal his conviction and sentence he would have had to appeal to a higher court, for example, a magistrate assigned to the district or a magistrate in New Providence.

The administrator had no power to change his own order.  The police should be requested by the appropriate authority or advised by the Attorney General to ensure that the court order is carried out with no reference to the telephone conversation or conversations between the Administrator and Minister Gray.

It is deeply disturbing that Gray has not tendered his resignation and barring that, he has not been fired by Prime Minister Christie.  Gray’s conduct cannot be allowed to stand.  It is a fundamental tenet of our system that there is an independent judiciary.

If Gray refuses to resign or is not fired it will be another indictment of Christie and his cabinet, who will have condoned his grave ethical breach.

It is telling that the Brave Davis matter and the Alfred Gray matter followed in rapid succession.  It speaks to a culture of impropriety in the PLP where various standards are breached with little or no repercussions, tolerated by an ineffectual prime minister whose out of control cabinet scarcely respect his authority.

Within mere weeks the fig leaf has been ripped from the pretension of minimal propriety by the current Christie administration, with the Gray and Davis matters grave examples of the PLP’s contempt for the rule of law, parliamentary conventions and good governance.

We are witnessing a replay of the 2002 to 2007 Christie administration, with a weak leader with delusions of grandeur, unable to fulfil scores of election promises and presiding over a helter-skelter government with scandals, allegations of corruption and misconduct exploding with frightening regularity, as he keeps singing his happy song and doing his happy dance in his world of make-believe, while he wishes against hope that his problems will somehow simply vanish into thin air.  They will not.

The Gray affair is one of the gravest crises Christie has experienced in his two non-consecutive terms as prime minister.  The head-in-the-sand no comment routine he has employed in other crises will not work this time.

Christie and the party were warned by veteran party supporters before the last election not to run certain individuals including Gray, Tall Pines MP Leslie Miller and South Andros MP Picewell Forbes, all who have now proven terrible embarrassments and distractions to Christie and the PLP.

Witnessing Christie’s toleration of all manner of misconduct, both from 2002 to 2007 and now, Gray and other ministers may have concluded that they can do and behave exactly as they please as cabinet ministers.

Gray is known for his unmatchable and unbridled arrogance.  Many Family Island Administrators find him tyrannical.  His call to the Mayaguana Administrator is in keeping with a certain mindset.

Many who voted PLP desperately hoping that the party would be better this time, have been fooled again, let down and are deeply disappointed.  Those who were depressed on election night at the prospects to come have, sadly, been proven correct and are now more depressed.

Christie seems to have learned little since his previous term, except this: he has gotten worse.  If he fails to fire Gray and Davis he will have conclusively demonstrated how much worse is his leadership this term and that he is simply the same old face of the PLP, though he promised to be a new kind of leader.

At a 2002 rally at Clifford Park Christie solemnly declared:

“ …  If I hear about any minister of mine trying to practice any victimization on anybody the next time he hears from me, it will be to tell him to clean out his desk and head for the door.  Victimization is an evil I put on par with corruption in high places.  Neither will be tolerated under an administration headed by Perry Christie.  Of that you can be assured.”

As the facts of the Alfred Gray matter continue to unfold, we shall see whether Christie was just mouthing platitudes as usual.