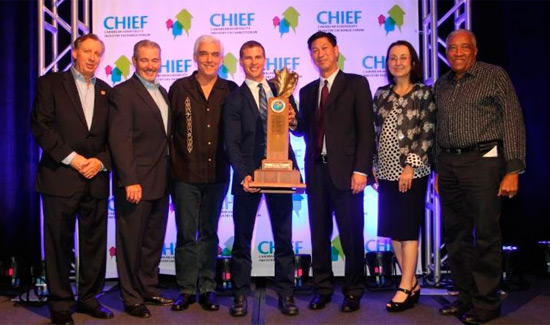 Stewart is the 35th recipient of this prestigious award, which is sponsored by MMGY Global, and is the highest professional honor bestowed in hotel and resort operations in the Caribbean. The award recognizes excellence in all areas of operations, as well as a commitment to the training and development of staff, contributions to the community and a demonstrated commitment to sound environmental practices. The award also acknowledges each recipient’s active role in both national and regional issues affecting Caribbean tourism.

Stewart is at the helm of the world-leading resort company, Sandals Resorts International and The ATL Group in Jamaica. He is also President of the Sandals Foundation, a 501(c)(3) nonprofit organization that supports the Caribbean community through investment in sustainable projects in education, community and environment to help improve people’s lives and preserve the region’s natural surroundings.

He was born in the same year that his father, Gordon ‘Butch’ Stewart – who received the Hotelier of the Year in 1992 – purchased his first hotel and launched the Sandals Resorts chain. Adam Stewart was raised in Jamaica and graduated from Florida International University’s acclaimed Hospitality Management Program in Miami, FL, before undertaking a fast track immersion through the Caribbean empire which today comprises 20 resort properties across three brands and seven islands.

In the nine years of Adam Stewart’s stewardship, Sandals has experienced a period of unprecedented growth, innovation and development transforming the all-inclusive concept to Luxury Included® resorts that offer guests levels of exclusivity never seen before.

With Stewart as the pioneer, the company has introduced “game-changing” developments such as the addition of the Italian and Key West Villages at the company’s flagship Beaches Turks & Caicos Resort Villages & Spa, the launch of Sandals Emerald Bay in the Bahamas, a 245-room resort with a 150-slip marina and Greg Norman golf course, and the company’s first resorts in Grenada and Barbados, the hugely-anticipated Sandals LaSource Grenada and, most recently, Sandals Barbados.

Stewart continued the company’s expansion by launching Grand Pineapple Beach Resorts value brand in Jamaica and Antigua, as well as the introduction of boutique villa properties such as the 52-acre private island, Fowl Cay Resort, in the Bahamas. It is this pioneering spirit which has brought him numerous accolades including being named the Jamaica Hotel and Tourist Association’s Hotelier of the Year for 2014, World Travel Award’s Rising Star, recipient of the Distinguished Alumni Torch Award from FIU, Caribbean World’s Travel and Tourism Personality of the Year and The Gleaner’s Jamaica 50 Under 50 Award.

Though one of the most prominent young businesspeople in the world, Stewart remains a proud Jamaican and citizen of the Caribbean, dedicating much of his time to elevate the region he calls home.

In 2009, Stewart founded the Sandals Foundation with the aim of uniting the region under one common goal: to lift its people through education and protect its delicate ecosystem. The Sandals Foundation harnesses the resources, talents, partnerships and awareness behind the Sandals Resorts brand to tackle a myriad of issues affecting the Caribbean. Stewart also founded and sits as Chairman of the We Care Foundation, a local non-profit organization that brings together Montego Bay-based individuals to raise funds and improve the facilities of the nearby Cornwall Regional Hospital.

Underlining his reputation as a staunch advocate of education, Stewart established an internationally-accredited private sector educational institute, Sandals Corporate University. The Sandals Corporate University launched in early 2012 and pushes the boundaries of distance learning in the Caribbean with thousands of team members ready to benefit within the first year alone and the resorts themselves reaching new levels of excellence. Within the local community, Stewart plays a role as ambassador to the University of the West Indies, helping to promote further education in the region.