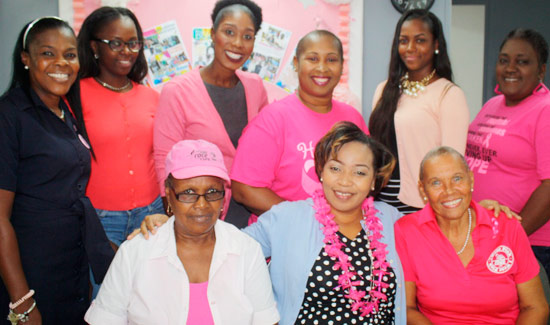 For the past five years, the Sister Sister Breast Cancer Support Group has received a helping hand from the Bahamas Technical and Vocational Institute (BTVI) in the fight against breast cancer, and this year the institution is turning it up a notch. 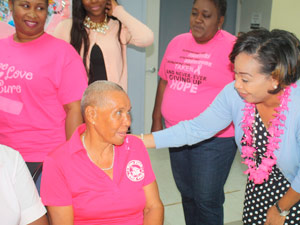 From Pink Scoop ice cream day to a Pink Awareness bake sale, to Sock it to Cancer Pink Sock Day and a balloon release day in memory of survivors and those who have passed on, BTVI’s community service project is to promote breast cancer awareness, particularly as early detection saves lives.

BTVI’s Dean of Student Services, Racquel Bethel, said it is important that educators venture beyond the four walls of the classroom.

“We have to connect students and society. We live in a community and hurricane Matthew reminded us that it’s not just about us. We have to think beyond ourselves and be our brother’s keeper,” she stated.

The first in a series of events was a speakers’ series that included breast cancer survivors.

“We connected students with faces. These are real people, and they told their stories. Breast cancer could impact anyone at any age,” said Ms. Bethel.

One of the speakers, Lakeisha Bastian, is a survivor of eight years. She underscored the importance of educating and encouraging people to become supporters. She said an abundance of awareness needs to be garnered so people can become more sensitive towards breast cancer.

The non-profit charitable group’s president, Andrea Sweeting, stated that support is a part of the survival kit. The Bahamas has the largest rate of breast cancer individuals per capita.

“It’s not a death sentence,” added Meredith Munnings, “we want people to go and get tested, and if they have breast cancer, we want them to take the steps to be able to live the best life ever.”

Although Kayla Ingraham does not have breast cancer, it has been in her family for years. Furthermore, the diagnosis for her co-worker, Lakeisha Bastian, brought the reality that much closer.

“I feel it’s my duty to support my friend. I feel I’m obligated to support her. It could have been me who was diagnosed and she would want support. I have to support people because I don’t know when it could be my time,” said the loyal friend.

Hence, Ms. Bethel is convinced that giving is a part of learning. She said BTVI’s Student Affairs’ team will continue to push for activities that motivate students to become more community-minded.

“A mandate of BTVI is to build good citizens. We want them to value giving back. It builds character and model citizens,” she said.