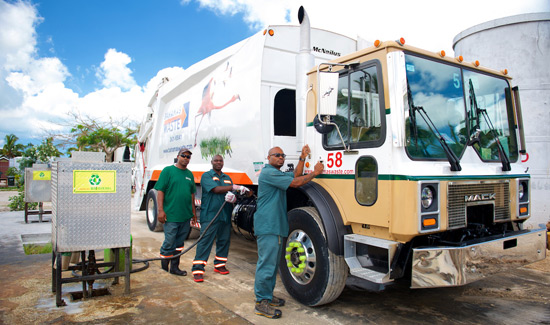 New Providence, Bahamas – Biodiesel is a renewable, clean-burning diesel replacement that continues to reduce global dependence on foreign petroleum, all while creating jobs and improving the environment. Made from a diverse mix of feed stocks including recycled cooking oil, soybean oil, and animal fats. The biodiesel market has increased from about 25 million gallons in the early 2000s to more than 2.8 billion gallons in the United States alone, and could produce about 10 percent of the diesel on the global transportation market by 2022.

The Bahamas is no exception, particularly as the push toward local, and regional environmental responsibility becomes stronger. In 2009 Bahamas Waste officially opened its one-million-dollar biodiesel facility in New Providence which has allowed for the manufacturing of up to one million gallons of waste cooking oil into biodiesel each year. Bahamas Waste recently joined forces with Bahamas Sustainable Fuel which now operates the local biodiesel plant as part of a new collaborative effort. Since its inception, facilitated the collection of thousands of gallons of used cooking oil which is refined at the company’s Gladstone Road location.

“We collect oil from all of the fast food restaurants on the island from Burger King to KFC, ane even your smaller Chicken shacks as well as the major hotels on the island” said Renardo Mackey Operations Manager at the Biodiesel facility. “We collect anywhere between six thousand to eight thousand gallons per month. On a daily basis we can collect anywhere between three hundred to seven hundred gallons of raw cooking oil” he explained.

As a company, Bahamas Waste committed to the work of environmental preservation; this is equally true of its employees who have also taken up the mantle as well and received special recognition.

“What we wanted to do was to really celebrate those drivers who fully utilize the biodiesel trucks in our fleet and reward them for doing their part in helping us protect the environment.” explained Health and Safety Manager Deshawn McGregor.“

Already, more than four of the company’s trucks already use the manufactured biodiesel which eliminates the plumes of thick black smoke often associated with heavy duty vehicles. As Bahamas waste moves toward a 100% fueled biodiesel fleet plans are also in the works to expand the manufacturing process and eventually offer the product to its customer base as well. 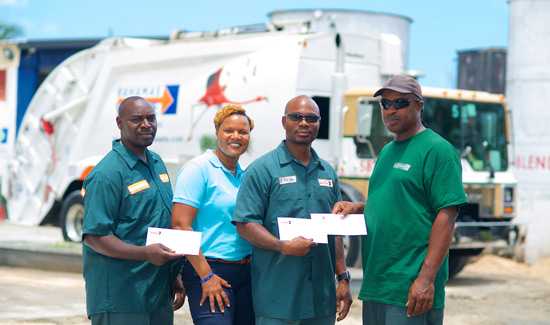 Captions:
Members of the Bahamas Waste Team fill up one several trucks which currently run on the use of bio-diesel. The manufacturing process which began back in 2009 converts used cooking oil into a refined product which is being used to fuel more than four of the company’s fleet of waste collection trucks.

Bahamas Waste recognized and celebrated three of its drivers, all of whom have logged impressive hours behind the wheel of the company’s bio-diesel fueled trucks. The trio was presented with gifts as a token of appreciation for their ongoing commitment to the project.