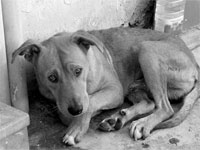 Unwanted dogs abandoned by the public are placing a drain on the resources of the Humane Society of Grand Bahama.

In July 194 new animals were taken in by the Humane Society.

“July was the largest number of animals we’ve ever taken in during a given month,” said Tip Burrows executive director of the Humane Society of Grand Bahama.

The influx of animals brought the total number of animals at the facility to 404. Of this number, 362 of them were dogs and puppies.

Burrows maintained that while the organization is able to house the animals comfortably, the situation is not ideal because at capacity the facility likes to hold 200 animals.

“The ones that are here are being housed comfortably but we can’t afford to take care of that many,” she said.

She explained that the Society receives no funding from the government or local government and the organization is solely responsible for maintaining the animal population in Freeport.

Burrows noted that many persons acquire dogs as pets when they are puppies, but they are not fully committed to taking care of them.

It is these same animals she further stated that later contribute to the stray dog population on the island.

“Too many people acquire a puppy on impulse because it’s there and cute. They don’t think about the commitment that they should be making to that animal.”

She added that a part of the problem is that it is too easy for people to get a puppy because in many cases persons get animals from their neighbours.

Burrows added with a degree of frustration that in many cases pet owners fail to take the animals to the veterinarian to get their shots or have them spayed or neutered.