A Delicious Solution To Lionfish Invasion 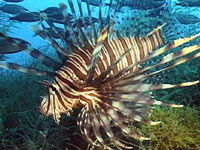 The federal government has thrown its weight behind plans to field a novel weapon – the American appetite – in a bid to halt the spread of the voracious and invasive lionfish.

Like Tribbles proliferating in the holds of the Starship Enterprise, lionfish have spread throughout the Caribbean and along the Atlantic Coast in recent years, most recently invading critical reef habitat off the Florida Keys.

The non-native fish, with their “manes” of venom-tipped spines, have no natural predators in these waters. They eat indiscriminately — consuming some 56 species of fish and many invertebrate species — and reproduce rapidly.

This has prompted scientists to turn to an equally ravenous species to control the beautiful pest.

“The only way to really help the reefs is to actually get people interested in fishing for lionfish,” says Renata Lana, a spokeswoman for the National Oceanic and Atmospheric Administration, which just launched an “Eat Lionfish” campaign. “In fact they are quite delicious fish.”

Lionfish, also called turkey, scorpion or fire fish, are not considered food by residents of the Indian Ocean and the Western Pacific, their native habitat. They were kept as exotic pets in the United States for years, and researchers say it was probably someone in the aquarium trade who first freed lionfish into the Atlantic near Florida, where they were first spotted in the mid-1980s.

Since then, there has been a population explosion. A single female produces about 2 million eggs a year, and hatchlings become sexually mature in about one year, said James Morris, ecologist at NOAA’s Center for Coastal Fisheries and Habitat Research National Ocean Service in Beaufort, N.C.

“Lionfish have a life history that has allowed them to be a very aggressive invader,” he said. “When they invade, they eat the abundant prey first, and then start dieting on other species.”

Lionfish now thrive from North Carolina to the Bahamas, in shallow waters and coral reefs, as well as deep water environments. They can live warm or cold water, and have been seen as far north as Massachusetts. In some coral reefs they outnumber native commercial species.

Conservationists say the lionfish threaten recovery of overfished species like grouper and snapper by eating them, consuming their prey and competing for space in the reefs. They also feed on species like parrotfish, which normally control the growth of algae on a reef.