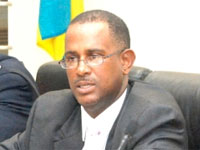 Tommy Turnquest, Minister of National Security, has categorized the recent break-ins at four government buildings as an attack by criminals attempting to destabilize the government.

“It’s an attempt to destabilize the government and there’s more to it than it seems,” said Turnquest on a local radio show.

The criminals breaking and entering have ransacked file cabinets and drawers as if searching for documents, broken doors and windows and even defaced property. Last week a message was left on the door of the chambers of Senior Supreme Court Justice Jon Isaacs: “The PLP must win the next election. All FNM’s must die and the all PLP’s must live.” The message was accompanied by a drawing of a gun firing towards the letters FNM.