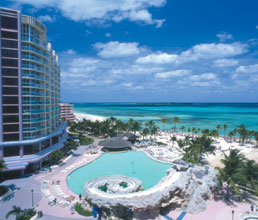 The Wyndham Nassau Resort and Crystal Palace Casino was like a ghost town yesterday as the last guests checked out before the hotel closed its doors.

The hotel is closing for six weeks, as a “strategic financial plan to allow us to reduce significant loses during this period”, according to management.

The planned closure went into effect yesterday to the surprise of some visitors.

“We didn’t know the hotel was closing. We got here on Friday and we found out when we went down to the beach,” said Alex and Debra Boyland, who were visiting for the first time form Atlanta.

The Boylands made a last minute booking to stay at the Wyndham. They said the website they consulted had no information about the hotel’s closure.

Another set of guests said the closure caused them additional expenses and if they had known of it they wouldn’t have stayed at the hotel.

David and Renee Ford booked their hotel through the Travelocity website and had no idea about their hotel’s closure.

“It was an inconvenience. Everything was out of stock. They had a jack hammer operating in the middle of the day in the casino. At night we couldn’t use the slot machines. It cost us an additional $60 per day for a cab to and from the Atlantis to go to the casino,” said Mr and Mrs Ford.

The family also experienced a mix-up over the cost of excursions. Mrs Ford said their online agent advertised excursions as free, but they ended up having to pay at the hotel.

Mr Boyland said, “everyone was stand-offish and not pleasant” when they first arrived.

“There were less people, but we liked that – less kids, less noise. Except the restaurants and facilities were closing down. There was some poor service. I had to try to be understanding; when you are losing a job and being forced to find a new job, I would probably feel the same,” said Mrs Boyland.

This is the second year in  the a row the Wyndham closed its doors during this time of year.