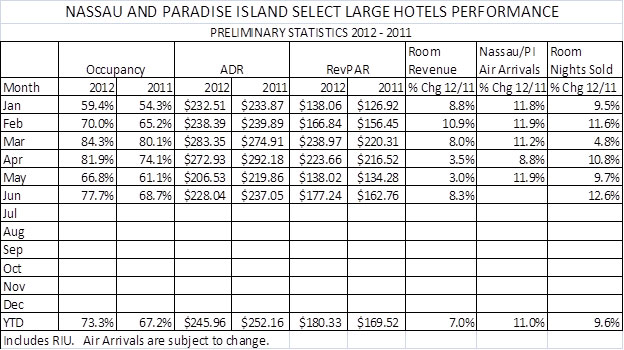 “Our marketing efforts are paying off.  These results, while generally encouraging, continue to point to challenges our industry faces.  While we have seen occupancy rates increase in each of the past 10 months, our ADR has also declined in 7 out of the past 10 months.  To remain competitive we are offering lower rates and investing heavily in marketing and value-added packages.  The increased room night volume factor is under pressure from reduced average rates, increasing operating costs, and slowdown in group business; we remain cautious” according to BHA President Stuart Bowe.

The Ministry of Tourism and the Nassau Paradise Island Promotion Board continue to offer travel credits as part of a highly successful promotion campaign.

Looking ahead, President Bowe expressed caution.   “The next four months could be very challenging for the industry.  The traditional lull in activity during the soft months could deepen as we see growing uncertainty about the global economy and consumers in our major market, the United States, become preoccupied with the upcoming US election when historically they travel less. We are focusing on marketing efforts and supporting events to inject business during the period”.

The June and year-to-date results also show a similar pattern to pre-recession performance, with the major hotels beating 2008 occupancy results but lagging behind in average daily room rates.

Preliminary air arrivals to Nassau to the end of May were up 11%.