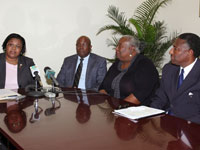 With 150 countries participating, the event is being held under the auspices of the Food and Agriculture Organisation (FAO) of the United Nations (UN).

The theme is ‘Agricultural co-operatives: key to feeding the world.’

To underscore the importance of eliminating hunger, said Mr. Gray, FAO and the UN have adopted 2012 as International Co-operatives Year.

“There is a strong and positive relationship between FAO and my Ministry which can only grow from strength to strength,” said Mr. Gray.

As hunger affects over one million people globally, he noted, greater investments would be required in agriculture.

“We believe that it is only in agricultural pursuits and involvement could this hunger situation be turned around,” he said.

“FAO recognises this and has been involved in assisting nations in their attempt to reduce hunger and even to eradicate it.”

“They are the ones who will produce food sufficient to feed the world,” he said. “It is the small farmers who are involved generally in cooperatives that will cause food hunger to be reduced or even eliminated.”

More than one billion people are involved in co-operatives internationally.

In The Bahamas there are three agriculture co-operatives in New Providence, Grand Bahama and Abaco, and several youth initiatives which serve to expose young Bahamians to the co-operatives model.

“Bahamians generally are not interested in agriculture,” he said. “I have tried everything in my power to create that interest by offering incentives of just about every kind but the responses has not been as good as I hoped they would be.

“But every day we will plug at it until we get, especially young people, to see that there is dignity in all forms of work.

“And since agriculture we are hoping will become the third pillar of our economy, we cannot ignore the importance of getting involved any longer. Jobs will be created in this very special field.

“The time is going to come when the need to do it is going to peep its head out of the ground because when you have to do it, perhaps we will see a greater response.

“We are working gradually to improve our agriculture initiatives and their effect in the national food security programme.”

Whereas the co-operatives in Grand Bahama and Abaco have been instrumental in traditional farming initiatives, the newest, the Bahamas Agribusiness Co-operatives based in New Providence, has taken a different approach.

Deputy Director with responsibility for co-operatives, Judy Simmons said this group has centred on a project that encompasses all farmers.

Traditionally farmers have had difficulty getting their products to market, she noted.

This group has embarked on registering all farmers throughout the country, assisting them with what crops to grow, and targeting when these crops will be ready for market.

Then they are partnering with wholesalers and retailers in collecting and bringing these products to market.

“This would eliminate a lot of the wastage that has been happening over the years,” she said.