Minister Promises to Put Dignity Back into Sailing

Minister of Agriculture, Marine Resources and Local Government, V. Alfred Grey, said September 27 that he intends to bring dignity and accountability back into sailing.

Mr. Grey was in Grand Bahama for the official opening of the 18th Grand Bahama Regatta. The theme for the event is: Regatta in The Magic City, and is honouring sporting legend, Churchill Tener Knowles.

He told participants assembled for the opening ceremony that over the years, regattas have become a vital part of our sport and cultural way of life, and have developed from an inter-settlement competition among sailors to an inter-island sport, thereby making regattas national events.

Likewise, he informed that regatta competitions, home coming celebrations and festivals are in the portfolio of his ministry.

“And, it is my hope, and intent, to elevate this national sporting event to a level of prominence it deserves.  With the help of the boat owners, sailing associations, sailors and sponsors, we can soar to new heights.

“As minister responsible for regattas I will endeavour to bring accountability to the structure of regattas and put dignity back into sailing thereby restoring excellence of this pastime. As we move forward we will seek innovative ideas that will bring new life to the sport of sloop sailing,” he stated.

Minister Grey also drew attention to the fact that the organisers of the Grand Bahama Regatta was honouring a man “whose contributions to sports have been considerable and whose pursuits have made a positive difference in Grand Bahama.

“Mr. Churchill Tener-Knowles is a stalwart in business and a giant figure in the sport of softball.  We salute great Bahamians and their achievements in every area and acknowledge tonight that Mr. Knowles’ contributions have helped to develop this community and consequently, our entire country,” he stated.

Mr. Grey said he was pleased to learn that the 2012 Grand Bahama Regatta is one of the largest ever, and that it tells him that the sport is progressing and with the growth in boats and participants come financial benefits to the island of Grand Bahama.

“The Ministry of Agriculture, Marine Resources and Local Government is committed to the success of regattas and even in this time of fiscal austerity, it has granted $25,000 to the Grand Bahama Regatta,” he informed. 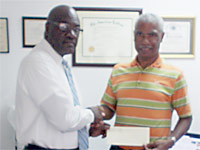