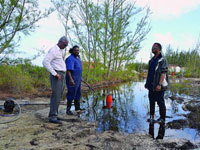 A 70,000 gallon fuel spill at a Bahamas Electricity Corporation (BEC) storage facility in Rock Sound, Eleuthera this week, which could cost the government up to $350,000, exposed the long-running theft of fuel from the island, BEC Chairman Leslie Miller said.

Miller said officials suspect that an unknown thief was siphoning thousands of gallons of fuel from the storage facility for some time. Miller suspects that during this latest incident, the thief left the area abruptly, without the intended fuel, which later overflowed out of a holding tank and onto the ground.

“From all indications, there was theft,” Miller said, as he toured the spill site with several government officials yesterday.

“Now our question is how long has this theft been going on?” BEC officials discovered the spill at 9 a.m. on Tuesday.

He said BEC has evidence that similar thefts have occurred at facilities in other parts of Eleuthera including Harbour Island and Hatchet Bay.

BEC will now increase manpower at the Rock Sound facility and look at other ways to mitigate future theft.

“That facility there is never used except when the ship comes in,” Miller explained. “The ship was bringing in 110,000 gallons of fuel. As you see, the fuel line…goes to our plant. Obviously someone was smart enough to use one of the tanks as his personal tank. So when the ship comes in, he fills up with about 20,000 gallons of fuel. When the ship leaves, he turns it off, and we suspect that maybe some emergency came up, the fellow had to leave, came back and that’s the end result because his tank overflowed and that’s how the spill occurred. He was filling his tank and it overflowed.”

A statement released by BEC on Thursday said a preliminary investigation found that a check valve was “tampered with and this contributed to the resulting fuel spill”.

“We need to put in the proper mechanisms so when the ship comes in more than one person is here,” Miller said. “I’m told that the norm is just to have one person here who goes to the ship and sees to it that it’s hooked up properly and goes to our plant. Obviously we have some serious flaws we need to correct.”

As Miller toured the site – with Environment Minister Ken Dorsett and area MP Damian Gomez – representatives from Baychem were busy cleaning up the spilled oil. About 90 percent of the oil had been contained as of yesterday, according to Miller. He said contaminated soil would be sent to New Providence to be treated and cleaned and later reused.

“It is a huge loss when you consider the fact that last year BEC spent $348 million on fuel, and every penny counts. That’s why your cost of electricity is so high. Our number one cost is fuel; the number two cost is overtime. So those two combinations had a detrimental effect on the profit line of BEC.”

Officials discovered the spill at 9 a.m. on Tuesday but did not make the information public until late Thursday.

The entire clean up is expected to be completed in two weeks. Miller said the spill would not impact electricity supply to the island and said BEC had enough fuel on hand.