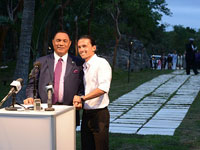 Prime Minister Perry G. Christie said several local contractors and up to 150 persons are being employed to craft the unique facilities of The Cove, Eleuthera as well as the landscaping surrounding the resort.

Speaking at the grand opening of the resort in Gregory Town, Eleuthera, the Prime Minister said the resort in its construction, furnishings and operations showcases the talent of Bahamians and particularly Eleutherans.

“I am informed that 75 persons will be employed at the operation of the resort, starting now and well over 100 more will be employed upon completion.  Mr. (Sidney) Torres has made a major investment in this much welcomed project, which is having a significant impact on rejuvenating the Eleutheran economy.”

The resort’s developer, an experienced hotelier, Sidney D. Torres IV, who hails from New Orleans, Louisiana, bought the property in July and worked tirelessly planning and executing what he has termed a “rebirth” of The Cove, Eleuthera, a mainstay of the island since it was first built in 1969.

Prime Minister Christie said, “Mr. Torres and his construction team have breathed new life into this amazingly beautiful property.  What bodes well for The Cove obviously bodes well for the people and businesses of the islands of Eleuthera.”
Minister of Tourism the Hon. Obie Wilchcombe; Minister of Legal Affairs and Attorney General Allyson Maynard-Gibson; Minister of Transport and Aviation Glenys Hanna-Martin; Minister of State for Investments in the Office of The Prime Minister Khaalis Rolle and Minister of State for Transport and Aviation Hope Strachan accompanied the Prime Minister to the opening.
Prime Minister Christie explained that when he came into office in May 2012, Mr. Torres was endeavouring to purchase and carry out the renovation and expansion of what was a hurricane damaged and run down hotel on a natural beautiful site, which to Mr. Torres had striking physical features, nestled in a romantic cove with endless possibilities.
“I am pleased that my Government quickly approved the investment and extended the benefits and tax incentives under the Hotels Encouragement Act,” the Prime Minister said.
“Today The Cove celebrates its grand opening re-introducing the resort to the local and tourist communities.  This milestone is not only significant to the hotel; it is significant to Eleuthera and indeed, The Bahamas.  This event marks the moment that we usher in a renaissance in tourism in Eleuthera.”
The Prime Minister said after completing the purchase of the 40-acre site, which extends over one of Eleuthera’s picturesque rolling hills, set between the highway and turquoise seas, Mr. Torres has invested $12 million in the project.  The resort comprises of 60 rooms, and by the end of the year the room count will be 120.
“The Cove is poised to become one of the leading resorts in the Family Islands.  It will invite time-honoured tourists to our shores; those who seek the natural offerings of impeccable pink sand beaches, clear turquoise waters and the warmth of the sunshine and the people.”
Prime Minister Christie said The Office of The Prime Minister, Investment Authority, Ministry of Tourism and all other relevant agencies of the Government will continue to provide the necessary services to ensure the success of the major investment for the benefit of the resort and the people of Eleuthera.
“Particular attention will be given to airlift and the support facilities of the Governor’s Harbour and North Eleuthera airports, as well as to staff training, so as to most positively impact service levels and repeat visitor factors.”
Mr. Torres spared no expense in his remake of The Cove, Eleuthera and is offering the use of his personal plane to fly guests from Ft. Lauderdale Executive Airport to the island, as part of an exclusive amenity package.

Guests will also be able to engage in snorkelling, kayaking and go on private fishing charters.  The Cove is intended to exemplify ideal island living.
Mr. Torres said, “My heart and soul went into the rebirth of The Cove and what better way to celebrate its opening than with a celebration of the places I love most – my hometowns of Eleuthera and New Orleans.  It was difficult yes, but impossible, never.”