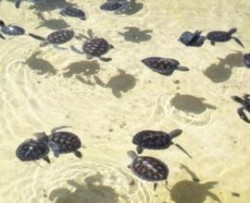 In an independent veterinary assessment document recently made available to the World Society for the Protection of Animals (WSPA) from July 2012, the popular island and cruise line attraction Cayman Turtle Farm (CTF) in the Cayman islands has had knowledge of animal health and endangerment problems on their property for more than five months, despite denials to the contrary as recently as late December 2012. It wasn’t until January 25, 2013, that the CTF publicly released a scientific report, which reaffirms the majority of WSPA findings.

The CTF document, conducted internally by the farm, reveals concerns nearly identical to those brought up by WSPA in their own assessment. The evidence in the CTF document from July 2012 acknowledges welfare, health and care issues, stating, “[A] significant proportion (possibly even a majority) of turtles exhibited skin lesions,” and confirming that the self-proclaimed conservation facility does not have any veterinary oversight for the turtles at the farm and has observed evidence of cannibalism.

Despite this, the CTF publicly claimed in December that WSPA’s claims were “ungrounded,” “unfounded, erroneous and sensationalised.”

The document confirms the findings and evidence on which WSPA has been pushing the farm to change.