Contract Worth $1.3 Million Signed To Repair Roads In Central Abaco 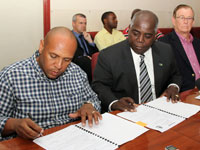 Deputy Prime Minister and Minister of Works and Urban Development Philip Davis signed a contract worth $1.3 million to repair roads in Central Abaco at his office, Thursday, January 3, 2013.

During the contract signing, Deputy Prime Minister Davis explained that in 2012, it was observed that the roads in Central Abaco (in the vicinity of Marsh Harbour, Murphy Town and Dundas Town) had significantly deteriorated over an extended period of time.

“As a result, the Ministry of Works and Urban Development was requested to design and assess the scope of works for the repair of the roads in Central Abaco and to enter into negotiations with Bill Simmons Construction and Heavy Equipment Co. Ltd. to effect the necessary repairs,” he said.

In accordance with this request, the technical staff of the Ministry produced the required scope of works.  They also negotiated agreed unit rates with Bill Simmons Construction and Heavy Equipment Co. Ltd., the Deputy Prime Minister added.

Cabinet agreed to award the contract to Bill Simmons Construction for the repair (patching and sealing works) of five miles of the Central Abaco roads after a recommendation was forwarded to Cabinet for consideration, he said.

The road works are expected to be completed in four months.

“It should be noted that this road works project is being executed in a part of the island of Abaco that is considered to be the busiest area,” Deputy Prime Minister Davis said.

“The roads in Central Abaco are used by the majority of the island’s residents.  The completion of this project will therefore enhance the level of road safety for motorists and pedestrians on that island as they go about their daily routine.”

He added that the Ministry will look after this investment along with others by providing “adequate and timely road maintenance”, to contribute to cost containment relative to the road works programme.

Mr. Simmons said his company will be mobilised by the second week of January 2013 and will hire 10 to 15 locals from Abaco as well as technical persons from the office in New Providence.