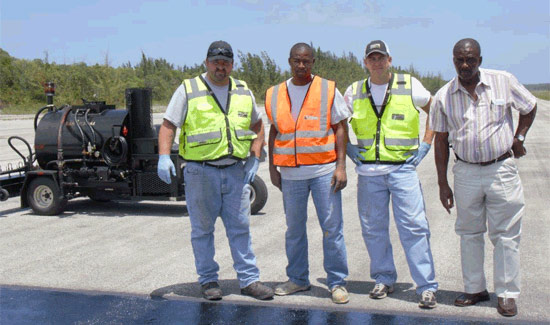 After a 15 month-wait and several rounds of rigorous government mandated testing, Caribbean Pavement Solutions (CPS) is looking to officially bring its “revolutionary” RejuvaSeal to airports and roadways across the nation.

“The introduction of RejuvaSeal to the local market will usher in a new era for preventative maintenance of roads and airport,” said the company’s managing director, Dr Allen Albury.

An American corporation with headquarters in Texas and China, RejuvaSeal manufactures its eponymous asphalt rejuvenator which is used to revitalize, seal and protect asphalt-paved airport runways and roadways in a number of jurisdictions.

RejuvaSeal is the linchpin of two proposals submitted by Caribbean Pavement Solutions to the government in July 2013.

The company, a subsidiary of Bahamas Striping, proposes to RejuvaSeal 10 airports, in addition to installing perimeter fencing and lighting for $10 million.

The second proposal seeks to have the company RejuvaSeal roads in 10 Family Islands, in addition to road striping, installing cat eyes (reflective road studs used as safety lights), producing road signage and a road education program, all for another $10 million.

RejuvaSeal has been used for over 40 years on various types of asphalt paving and by the US Air Force, said Dr Albury.

Still, the product required Civil Aviation and Ministry of Works approval for use on government projects. Caribbean Pavement Solutions invested around $125,000 in research and development with these various tests.

“We’ve been in various discussions at various levels of government over the past several months,” said Dr. Albury. “With respect to the airport and roadways projects they have received favorable preliminary approvals. The test results would actually solidify those proposed projects and move them forward.”

For months CPS conducted a series of tests on various pavements types such as asphalt and sand seal pavements to gauge RejuvaSeal’s performance under local conditions.

“The main testing area for the government was the Rock Sound Airport,” said Atario Mitchell, president of Bahamas Striping Group of Companies. “The company also carried out private demonstrations for local business owners, in addition to a RejuvaSeal application in West End, Grand Bahama.”

At the Rock Sound Airport, the company tested the RejuvaSeal in three different application rates – light, medium and heavy. The goal was to determine how the sand seal surface would react to the different levels and what application would be best for the area, Mr Mitchell explained.

The company also took core samples which tested for RejuvaSeal’s level of penetration. Samples were sent to an independent, US lab for testing.

“The core sample confirms that the RejuvaSeal does what it’s supposed to do, that is, to penetrate the pavement. We had an 80 percent penetration ratio when compared to asphalt.”

Other sealers on the market simply coat a pavement. Thus, they tend to lay-over the top of pavements and eventually flake or peel off. RejuvaSeal is said to be the complete opposite.

“What RejuvaSeal does is actually penetrates the asphalt pavement and restores the coal tar binder in the asphalt and literally reverses the aging process,” said Mr Mitchell, who believes the product is also ideal for private projects such as gated communities, shopping plazas, parking lots and the like.

Two final tests, friction and permeability testing, took place last week. Approximately,150 feet of RejuvaSeal was applied at the Rock Sound Airport and on another 100-foot stretch of sand sealed road in Eleuthera.

“The whole idea is to determine when we put this material down on a road surface, runway, or taxiway, does it alter the friction capacity of any type of motorized vehicle whether it is an airplane or car,” Mr Mitchell explained. “Does it reduce the friction level and create more of a slippery service, or does it maintain the friction capacity that it typically would have?”

Test results are expected within two weeks. Based on RejuvaSeal’s performance in similar jurisdictions the company anticipates favorable results.

“This would allow for the extension of the life of the asphalt pavement prior to its complete rehabilitation,” said Mr Mitchell.

RejuvaSeal corporate puts it this way, for every $1 spent on its pavement preservation product, its $10 to $15 saved.

“When you look at the amount of money spent on road works in The Bahamas I would say this has the potential to save the government millions,” said Mr Mitchell.

If the government green lights its two proposals Caribbean Pavement Solutions has plans to construct a RejuvaSeal and cold patch manufacturing plant in Grand Bahama in 2015.