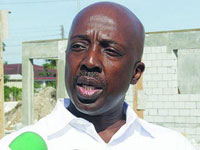 Labour Minister Shane Gibson said that the termination of 140 Wyndham Nassau Resort workers should not have happened the way it did and accused resort officials of “arrogance”, adding that Bahamians “cannot believe anything they say”.

Gibson added that given the resort’s track record, current employees ought to be concerned about their futures.

“Words cannot express how I feel about what’s going on over there,” he told reporters outside the Office of the Prime Minister.

However, Baha Mar VP of External Affairs Robert Sands said the decision to let the workers go was a difficult but necessary one for resort officials to make.

“We certainly regret this decision and we understand that this is a totally unexpected event,” Sands told The Nassau Guardian. “I don’t want this to come across as callous. Many persons made a contribution to the hotel, but unfortunately all these changes that we are making are designed to ensure efficient management during a period of challenging business conditions and economic times.”

Sands said the hotel recently cut its capacity by more than 50 percent, going from 850 rooms to 415 rooms as construction on Baha Mar continues.

He said despite the layoffs, the employment rate remains high with 430 employees still at the property.

“The other important point is we must be able to be in a position to reinvent our approach to service, maintenance and the operation of our resort. We need to get to a point where we try to break even,” he said, adding that the resort has been losing money for years. However, Minister Gibson insisted that the resort could have found an alternative.

“It is very discouraging, particularly when I see the number of foreign workers on that construction site while Bahamians are sent home,” he said.

Gibson also noted that the agreement between the Bahamas Hotel, Catering and Allied Workers Union (BHCAWU) and the resort mandates that the union be given notice of impending layoffs. However, he said that clause was ignored.

Sands said the union was made aware of the impending layoffs shortly before the employees were told.

“What happened this morning should not have happened,” Gibson said addressing scores of affected workers and members of the BHCAWU who later gathered at the prime minister’s office.

“The fact of the matter is there is a procedure in place to make sure that whenever you intend to discuss the possibility of laying individuals offs, you have to follow that procedure.”

Gibson said he received a call on Tuesday from a Baha Mar official regarding the impending layoffs. He said he advised management that it is obligated to give notice to the union.

“We didn’t only speak with management locally; we spoke to the owner. We told him our position. We told him that he should hold off until we had more discussions. The owner, of course, in normal arrogance decided that he did not want to procrastinate and he would move ahead. That was against the wishes of the government,” Gibson added.

And while the minister said the government can offer the workers some assistance, he noted it would only be temporary.

“The unemployment benefit, that’s secondary. The concern is what is going to happen to these people in the long run,” he said. “The country cannot afford to absorb anyone else on the unemployment line. So it’s really disappointing.”

Gibson said the union has the option to file a dispute. “But I think coming out of this, it tells us that we really have to strengthen our labor laws to allow for penalties to employers who continue to willfully disregard agreements that they sign,” he said.

The layoffs came on the same day as the most recent the employment figures were released. Nationally, unemployment decreased from 14.8 percent to 14 percent. The survey was conducted between October 29 and November 4, 2012.