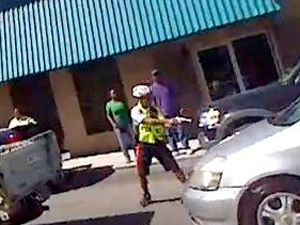 NASSAU, Bahamas — Shoppers and patrons on Bay Street, in downtown Nassau, Bahamas, were shocked on Friday when a police officer opened fire on a suspect, who was attempting to evade police capture.

According to police, a man suspected of fraud refused to step out of a gray Honda at around 11 a.m.

In a bid to escape, the suspect knocked the officer off his bicycle and attempted to hit a second officer.

Superintendent Ashton Greenslade, commander of the Central Division, said the first officer got to his feet, determined his partner’s life was in danger and shot the suspect.

Even after being shot the suspect refused to give himself up and led police on a chase, police said.

The 43-year-old suspect abandoned the car and attempted to escape on foot but was subsequently captured.

The suspect was taken to hospital by emergency medical services (EMS) personnel where his condition was reported to be stable.

He was unarmed, Greenslade confirmed.

Footage showing the incident surfaced on YouTube on Saturday and has since gone viral. In that video a uniformed officer is seen shouting at the suspect.

Onlookers, including visitors, on either side of the street can be heard screaming.

Asked whether the officer’s actions were excessive, Greenslade said the video is not a true reflection of what happened.

“The officer you see trying to shoot out the tire is actually the officer who got hit,” he said. “This is when he actually picked up his bicycle and attempted for a second time to stop this fellow.”

Minister of Tourism Obie Wilchcombe, who was contacted for comment on Sunday, said he was concerned that the incident could do “irreparable damage” to the country tourism.