Premier Warns Of ‘Chaos’ In Turks And Caicos 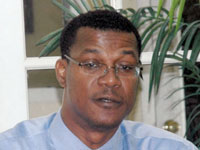 In an address to the heads of government of the Caribbean Community (CARICOM) at their first-ever meeting in Haiti, Premier Rufus Ewing warned of impending “chaos” in the Turks and Caicos Islands (TCI).

In the speech, Ewing touched on history but failed to acknowledge or accept his party’s responsibility for the partial suspension of the territory’s constitution in 2009.

In the opening portions of the speech, Ewing spoke of local opposition to value added tax (VAT), which is now being considered by the TCI’s much larger and independent neighbour, The Bahamas.

There was virtually no explanation of the dramatic debt and long term obligations brought about by Ewing’s Progressive National Party (PNP), which were a principal reason for the 2006 constitution being set aside and a new constitution put in place, which provides for more oversight by Britain. In fact, Ewing said in the speech that former Governor Richard Tauwhare needs to be brought back to the TCI to explain why he rubber stamped many of the proposals put forth by the Michael Misick administration.

Ewing’s speech also chided the 2009 Commission of Inquiry for having only one commissioner and whose conclusions brought about partial suspension of the 2006 constitution and direct rule by Britain within four months of its final report, despite efforts through the courts by former premier Michael Misick to delay the inevitable.

One portion of the Ewing’s speech remains unexplained, as he apologized to CARICOM for the TCI’s lack of support during, as he described it, “a period of euphoric success”. It is not clear to what period Ewing was referring.

During the six-year PNP administration from 2003-2009, then premier Misick often interacted with CARICOM and, in fact, on at least one occasion hosted a CARICOM leaders’ meeting on his leased private jet. During the previous eight years of the Peoples Democratic Movement (PDM) government, the TCI hosted the bloc as the location for one CARICOM meeting and then chief minister Derek Taylor attended all the other annual CARICOM meetings.

At one point in his speech, Ewing seemed to contradict his ongoing criticism of Britain, saying, “I want to make it clear that my commitment to this Caribbean Council … is not at the expense of my willingness to work with the UK government.”