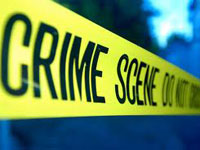 A scantily clad woman was found dead in bushes about 45 miles away from her home, a court heard on Monday.

A search party discovered Veronica Knowles, 68, at the Crossings in Long Island on July 13, 2010.

Adrian Robinson, 44, is on trial for Knowles’ murder and robbery before Justice Bernard Turner. He is unrepresented.

During opening arguments yesterday, prosecutor Sandradee Gardiner said that the evidence that the Crown planned to present led to only one conclusion: That Robinson is responsible for Knowles’ death.

Gardiner said that an autopsy could not determine a cause of death, but all the circumstantial evidence pointed to Robinson.

She asked the jury not to hold prejudices against the accused or the deceased.

She said that if the jury concluded that Knowles was in a relationship with a younger man, that should not be used against her.

Gardiner asked, “Is such a relationship a justification for anyone’s death?”

The Crown’s first witness, Sgt. Jethro Johnson, said he photographed Knowles’ body in bushes off an unpaved road, which he was said was not frequently traveled.

He said officers later got information that led them to her body. Based on additional information, Johnson said Robinson was arrested.

During cross-examination, Robinson argued with Johnson over the state of the bushes where Knowles’ body was found discarded.