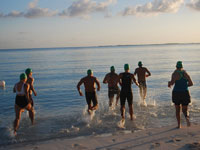 The 2013 Great Abaco Family Fitness Weekend was a great success, and in the second year managed to more than double the participation from the inaugural year.  This year 185 persons participated in the athletic events – including a 1-mile open water swim, a Sprint triathlon, an Olympic triathlon, a kid’s 1-mile run, and a 5k/10k fun run/walk.

The weekend opened on Friday afternoon with a 1-mile open water swim, sponsored by BTC, in which 25 participants entered the water at the beautiful Treasure Cay beach in Abaco.  The out and back course attracted athletes as young as 8 and old as 76, and all skill levels from competitive swimmers to recreational snorkelers.  The gorgeous Abaco weather allowed for a fast course, with Peter Wagner being the first swimmer to finish, defending his 2012 title with a time of 25:32.  The first female was Abaco local Christina Pyfrom, just thirteen years old, in a time of 28:01.  A young competitor, Ryan Knowles, managed to complete the swim in full clothing after forgetting her swimsuit, proving that determination and effort can overcome adversity.

The opening ceremonies and swim awards were held immediately following the swim.  The Member of Parliament for North Abaco, Renardo Curry, was present along with Ministry of Tourism representative Wynsome Ferguson.  The notable growth of the event was evident, as the Coco Beach Club was packed with participants, volunteers, spectators, and sponsors.  Sands Beer and Cocozona provided refreshments while Treasure Cay provided appetizers for the event.

At 7:30, the Olympic competitors entered the serene waters of Treasure Cay followed shortly by the Sprint competitors.  Adam Isaac of Nassau, who would go on to win the Men’s Sprint triathlon, exited the water first.  Patty Barigelli, a relay competitor from Hope Town, was the first Sprint female to exit the water following closely behind the top men.  Michelle Lakin-Hope, from Nassau and raising funds for the Elizabeth Estates Children’s Home, exited the water first for the ladies’ Olympic triathlon; Peter Wagner followed up his previous day’s win with the fastest Olympic swim leg.

The bike legs of the courses took the competitors out of Treasure Cay and heading North on the Queen’s Highway, a smooth, flat and fast course.  All types of skill levels and equipment were visible, from beach cruisers to high-end Ironman triathlon bikes, and a plethora of Jamis bikes sold by event sponsor Cycles Unlimited.  The fastest cycle times for the Sprint and Olympic races were 39 minutes 38 seconds by Peter Tynes and 1 hour 8 minutes by Simon Lowe, averaging 20 and 22 mph respectively.  One competitor did take a fall on the bicycle, but luckily kind-hearted Jessica Robertson was close behind and stopped to help until the Treasure Cay Fire Department was able to assist.  The gentleman quickly recovered and managed to complete the bike leg for his relay before requiring medical assistance.

The overcast weather broke into a light rain as the athletes transitioned into the  run portions of the races.  The course took the competitors into Treasure Cay, where spectators cheered from all around.  The welcomed cool break allowed for fast race times, with Karen Cook from Boulder, Colorado completing the individual Sprint 5k run the fastest in 22:41 and Adrian Whylly of Abaco completing the 5k run course in 22:24 to win the relay category for his team.  Simon Lowe had the fastest 10k Olympic run course time of 44:44.

The overall winners of the Olympic triathlons were Simon Lowe and Michelle Lakin Hope, both from Nassau.  Simon was returning for his second Great Abaco Family Fitness Weekend, however in 2012 he had to spectate due to a broken collar bone.  Michelle was competing in her first ever triathlon, and exclaimed brilliantly upon completing the race that she was competing for all the single mothers and to raise funds for the Elizabeth Estates Children’s Home.
The individual Sprint triathlons were won by Adam Isaac of Nassau and Vicki Stafford of Freeport, both returning competitors to the event.  Chris Pinder, David Knowles and Adrian Whylly of Abaco won the male relay; Lindsey McCoy (returning to the event to defend her 2012 relay title), Sarah Allen, and Veronica Beauchesne took the women’s relay title and Patty Barigelli, Chris Thompson, and Amy Lafitte won the mixed division relay title.

The Rotary Club of Abaco, one of the beneficiaries of the event, was well represented by Dwayne Wallas, their president.  Dwayne (nicknamed “Veg” by his friends) completed his first triathlon and managed to raise almost one thousand dollars to support the Rotary End Polio Now campaign and to lose 15 lbs in the process.

As the weather changed back to a sunny Abaco day, the triathlons were followed by one of the most exciting races of the weekend, the 1-mile kid’s fun run.  Thirty children aged twelve and under participated in the event.  The kids raced a closed course into Treasure Cay, cheered on by their many family members, friends, spectators, and the day’s recovering triathletes.  While not officially timed, the first young runner crossed the line in about 7 minutes 30 seconds.  As the finisher’s medals were awarded, smiles and family hugs were given bringing tears of pride to the eyes of family members and speculators alike.

The triathlon awards ceremony was held Saturday evening at the Spinnaker Room in Treasure Cay.  As the fiery Abaco sun set, the hand made awards by Abaco Ceramics were handed out to the overall competitors and age-group winners, complimented by stainless-steel water bottles provided by Cycles Unlimited.  The top male and female of both the Olympic and Sprint triathlons received TechnoMarine watches donated by the lead sponsor, Carlo Milano.  Special mention was given to Taryn Carroll of Marsh Harbour, who completed her first triathlon by herself at just 10 years of age.

The weather cleared up on Sunday morning to allow for a beautiful race day for the 5k and 10k fun run and walk.  Late registrations delayed the start by a few minutes, but shortly after 7:30am, seventy participants took to the course.  Walker Hirsch of Treasure Cay won the 5k race in a time of 21:49 at the young age of 13, being both the top junior and top male on the 5k course.  Veronica Beauchesne of Hope Town won the women’s division in a time of 24:15.  The 10k course was won by Simon Lowe in a time of 43:48, and the women’s 10k title went to Karen Cook with a time of 48:57.

The awards ceremony and brief closing announcements followed the morning’s road race.  The organizers thanked, and would like to thank again, all of the sponsors, volunteers, and participants along with Treasure Cay Fire Department, Royal Bahamas Police Force, and the Treasure Cay staff for their participation and assistance in the event.   The event would not be possible without the support of the community, and this year the involvement by everyone was awe-inspiring.

The Chronotrack timing system was used by Wildside Online, Nassau, to time all of the events.  The system is capable of timing all types of races and is used in 25 of the 30 largest races in the US.  Chronotrack has a network of over 200 timers in 35+ countries, including the Bahamas.  The same timing system is used to time Marathon Bahamas and other local events.

The success of the event can be measure by many factors.  All of the athletes and spectators had nothing but kind words, with persons being inspired to participate in the next year’s events, and to return to Treasure Cay in 2014.  There was a large returning group of competitors from across the Bahamas and the United States and the overall participation in the event more than doubled from the previous year.  The Treasure Cay Resort was sold out for the weekend as participants attended from all over North America, including 8 states and Canada.  Freeport and Nassau were well represented and Abaco had participants from throughout the mainland and the outlying cays.  Bahamasair showed an increase in airlift, and Bahamas Ferries was able to add a charter ferry for the event to accommodate passengers from Nassau.

The growing event continues to support its two main beneficiaries, the Rotary Club of Abaco and Friends of the Environment.  The charitable groups were instrumental in providing volunteers and assistance to the events, and funds and awareness were raised for both organizations.

The Great Abaco Family Fitness Weekend would like to thank it’s main supporters the Ministry of Tourism, Carlo Milano, Damianos-Sothebys International Realty, the Treasure Cay Beach, Marina and Golf Resort, and BTC.  A special thank you goes out to all the companies who provided prizes and support, as well as all the staff, volunteers and spectators who supported the athletes throughout the weekend.  The date for the 2014 event has not yet been set, but early planners can expect it to take place again in March.