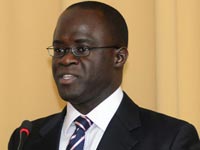 Cash has called for Davis, Christie and Gomez to make full disclosures regarding their ties to BPC. The UK-based firm is licensed to conduct for oil exploration in The Bahamas.

“Bahamians deserve to know the extent to which consultancy and legal fees and salaries were so large as to influence the decisions of government officials,” said Cash in a statement.

“Davis joins the prime minister and other ministers…[who can’t] ever remember how much a consultant was paid, the amount of a contract, or the amount of a legal retainer.

“Those declarations are not believable and their forgetfulness further supports the call for full disclosure.”

Davis has said he no longer has any ties to BPC and “resents” all inferences that the government is involved in any back room dealings with BPC.

Gomez last week did not disclose how much he was paid by BPC but said his firm’s fees were “in line with what our services were worth”.

Davis said he could not remember how much BPC paid him for his services.

“I think [this is] an irrelevant red herring. What I resent is the attempt to taint the character and integrity of myself and others,” he said. “I’m a lawyer and I will not point fingers at what happens with persons in their camp, but perhaps they need to take the [logs] out of their own eyes before they start to look at whether [specks] are in somebody else’s eyes. That’s what I resent, and our politics has to be above that.

“What we are here about is to determine whether or not there is an asset that belongs to the country that can be exploited with the participation of the people.”

Christie has previously said he severed ties with Davis & Co. and BPC before his involvement with the companies became an issue in the May 2012 election.

Gomez said his firm was engaged to give BPC “management and administration services” because the company did not feel the need to open its own offices in the country at that stage. He added that his company was chosen because he is a former executive at Shell and had insight into the oil industry.

The government has pledged to hold an oil drilling referendum, however Minister of the Environment and Housing Kenred Dorsett said this would not happen before the second half of 2015. He said the government wanted an exploratory well drilled before a public vote to determine if the country had commercially viable oil reserves.