GGYA Retention Up, Registration Down 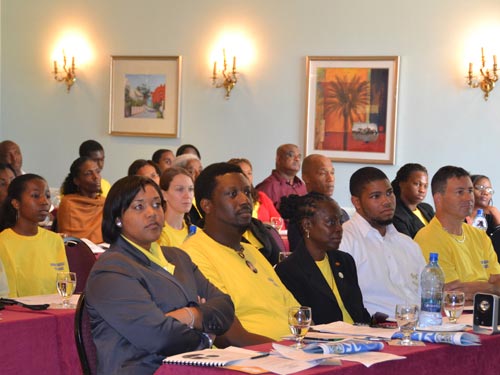 Internal challenges, namely a lack of volunteers, prevented the Governor General’s Youth Award from reaching its 2012 registration goal of 2,000 youths, attendees at the organization’s Annual General Meeting were told over the weekend.

Although there was a 16 percent decline in registration last year, the number of participants receiving Awards (the retention rate) was up 21 percent year on year, according to the programme’s national director, Denise Mortimer.

There are currently 1,658 GGYA participants throughout the country with more than 50 units spread throughout The Bahamas on islands including New Providence, Grand Bahama, Abaco, Acklins, Andros, Crooked Island, Eleuthera, Exuma and Long Island.

Despite operating as efficiently as possible the economic downturn has taken a toll on the programme’s finances, volunteers, board members and other stakeholders heard. Income totaled $356,000, while expenditures amounted to just under $380,000 for 2012 – a deficit totaling around $24,000, reported Everette Mackey, the GGYA’s national council treasurer.

A main source of funding for the programme is the Ministry of Youth, Sports & Culture’s G.O.L.D. Initiative – a three-year, financial partnership set to expire in December.

In a written message to attendees, the Minister of Youth, Sports and Culture, Dr. Daniel Johnson said the need to invest in the nation’s youths is greater now than ever before. He touted the benefits of the distinguished programme.

“It encourages them to develop into responsible, active citizens who will positively contribute to society,” said Dr. Johnson. “Further it presents a balanced, non-competitive schedule of voluntary activities, inspiring personal discovery and growth, self-reliance, perseverance, and service to the community.”

Speaking on the sidelines of the meeting held at the British Colonial Hilton this past Saturday, Director of Youth, Kyran Turnquest expressed optimism that the partnership between the government and the youth programme would continue beyond 2013.

“I’ve looked at the annual report and I’m impressed with the numbers. I’m impressed with the Family Island involvement,” said Mr. Turnquest. “I would definitely be advising my minister that this is something that we’re looking to do, embrace those organizations that are doing some great work and especially those organizations that are reaching the Family Islands.”

Extremely pleased with the GGYA’s progress is chairman of the National Council, Jack Thompson. He was recently appointed to the International Council of the Duke of Edinburgh’s Award. As the programme heads into its 26th year of operation, Mr. Thompson believes the GGYA has many more young people to reach.

“In five years we are going to be the pacesetters in this country, the fact that we are recognized and fully endorsed by the government of the Bahamas is, in and of itself, evidence of the success of the programme,” said Mr. Thompson. “Within five years our numbers would have exploded, the testimonials would be even greater.”

In the future, Mr. Thompson said he would like to see GGYA have its own headquarters and additional staffing.